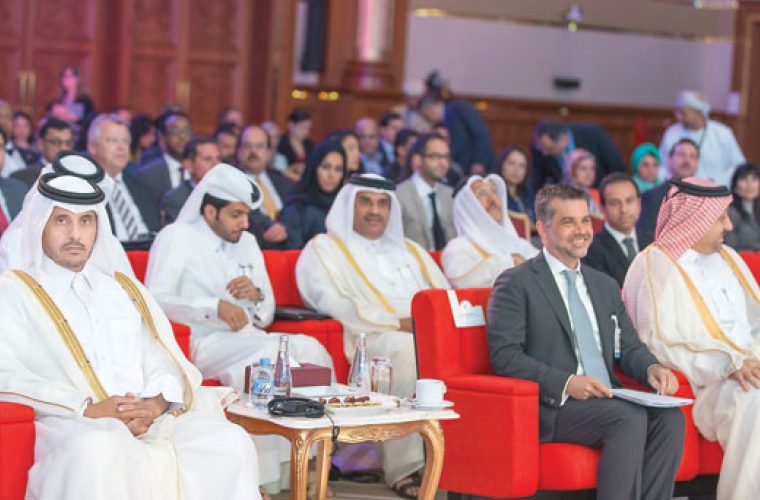 The Prime Minister and Interior Minister H E Sheikh Abdullah bin Nasser bin Khalifa Al Thani yesterday called for using dialogue as a tool to solve the pressing problems of the world such as hazards of climate change, terrorism and threats to international peace and security.

Addressing the opening session of the 12th US-Islamic World Forum at the Doha Sheraton, the Prime Minister said that mutual interests and shared responsibilities between the Muslim world and the US have resulted in establishing a common understanding and distinguished relations.

He stressed the need to continue work to deepen these relations on the basis of dialogue, understanding and partnership between the Muslim World and America, especially in the attainment of international peace and security.

“This forum assumes great importance at the current time in the shadow of the circumstances the world is going through, and in which the severity of divisions has increased as a result of tensions, conflicts and instability in many regions of the world,” said the Prime Minister.

The three-day conference is organised by Brooking Foundation in cooperation with the Permanent Committee for Organizing Conferences (PCOC) at the Foreign Ministry.

“Dialogue should not be directed only to the renunciation of differences and rapprochement of viewpoints, but it should be a higher form of constructive cooperation to address the pressing issues facing peoples such as hazards of climate change, terrorism, realization of international peace and security, water shortage, desertification, eradication of poverty, illiteracy and hunger and the achievement of sustainable development,” said the Prime Minister.

He said that the failure of the international community to address sources of tension and conflicts contributed to creating the environment for the implementation of terrorist operations.

No religion advocates terrorism; all religions call for noble values, tolerance, cooperation and constructive dialogue for the benefit of human society, therefore it is unreasonable to hold the Islamic states responsible for crimes perpetuated by some mislead people belonging to them, said the Prime Minister.

“The continued Israeli occupation of Arab territories is still the core of the problem of Arab and Muslim peoples,” he said pointing out that the desire for peace is a feeling and aspiration of all peoples of the world, and that the United States could contribute tangibly and greatly to the achievement of a genuine peace in the Middle East.

He called on the international community, especially the United States and the Security Council, to abandon selectivity and double standards and work hard to put pressure on Israel to comply with the international will to achieve peace with the Palestinians by ending the Israeli occupation .

The Prime Minister said that the tragedy of the Syrian people is further exacerbated by the failure of the international community, especially the Security Council to stand firmly against what is happening in Syria.

The international community must deal with this issue through a firm position, the provision of international protection and assistance to the Syrian people to enable them defend themselves against the heinous crimes committed against them and by pooling efforts to find an appropriate political solution to the crisis, he added.

The Forum yesterday discussed topics including the Strategic priorities for the United States and the Middle East and Pluralism in the Islamic world.

The other topics include Iran’s Role in the Region; Ending civil wars; and, Advancing Women’s role in the Middle East’.

The forum will also convene working and action groups which will focus on current issues confronting the Islamic world. Group topics include: Strategic Realignment in the Middle East; Combating ISIS propaganda networks; and, Community-led initiatives to counter violent extremism.