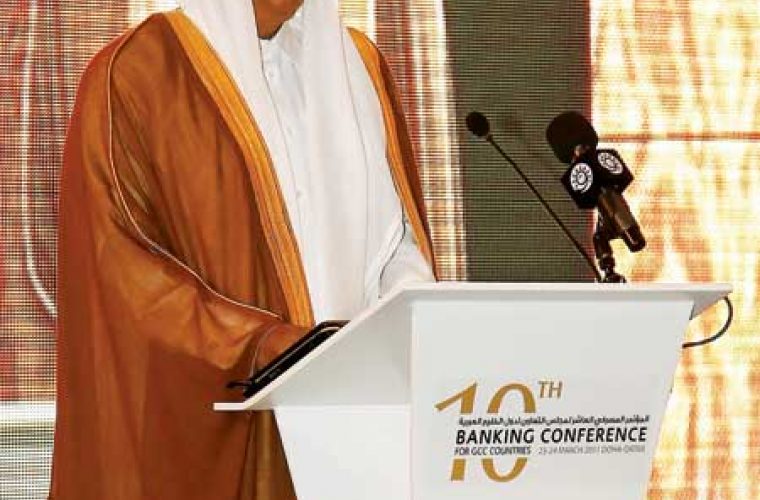 DOHA: The Prime Minister and Foreign Minister H E Sheikh Hamad bin Jassem bin Jabor Al Thani has urged GCC central banks and their supervisory departments to move quickly to protect local banks in terms of procedures and decisions. “Our current success in bypassing the aftermath of the international financial crisis does not absolve us from carefully studying all the details of the crisis so as to draw the lessons and avoid the repetition of what had happened,” he said. “If the international regulatory institutions have taken it upon themselves to tighten the controls on banking transactions to protect the resources of depositors and shareholders and achieve financial stability in all countries, our central banks in general and their supervisory departments in particular must take the matter seriously enough and move quickly to protect local banks through whatever it takes in terms of procedures and decisions.” He added that if no serious work is immune against error, continuing the march successfully requires rectifying such errors and reversing their effects in the right time. Sheikh Hamad bin Jassem was addressing the 10th GCC Banking Conference, the most important banking and finance event in the region, yesterday. The two-day conference was organised by the Qatar Central Bank in cooperation with GCC Secretariat General. The conference under the theme ‘GCC Banking and its role in development in light of current updates-Reality and Ambition’, attracted over 100 high-level international speakers and delegates. Sheikh Hamad bin Jassem noted that the prudent policies adopted by the GCC central banks and the support extended by the governments of the region were to a great extent behind the achievements made in this field. Speaking about the special nature of the GCC economies, he said that they are almost entirely dependent on oil and gas exports. “Despite what we have achieved up to now in the field of diversifying the sources of income, our returns from oil and gas will remain for years the mainstay of our general expenditure and livelihood,” he said. “In spite of this solid fact we must confirm the importance of the contribution of other sectors, foremost: banking, insurance and financial services sector, in the gross domestic product in the GCC countries. This sector has been growing steadily in the past decades and was able to achieve outstanding development in its technicalities, products and practices, which had to a great extent helped in safeguarding the position of our banking sector.” As for the GCC monetary union, the Prime Minister and Foreign Minister said: “The march of our countries towards establishing a Gulf monetary union has gone a long way by setting up the Gulf Monetary Council; and, as the dream of having a single gulf currency has become closer to realise I am confident that the aspirations of our peoples for unity will expedite the realisation of this dream not only in the four member countries of the Gulf Monetary Council but also for all of the GCC member countries.” He also urged GCC central banks to do their utmost to upgrade banking systems on a par with their counterparts in the countries with developed economies. “The present condition of our banking system is alright; and we hope it continues to be so in the future. You are required to reach the required equilibrium between economic growth rate on the one hand, and financial stability and price control on the other, he added.” The Peninsula