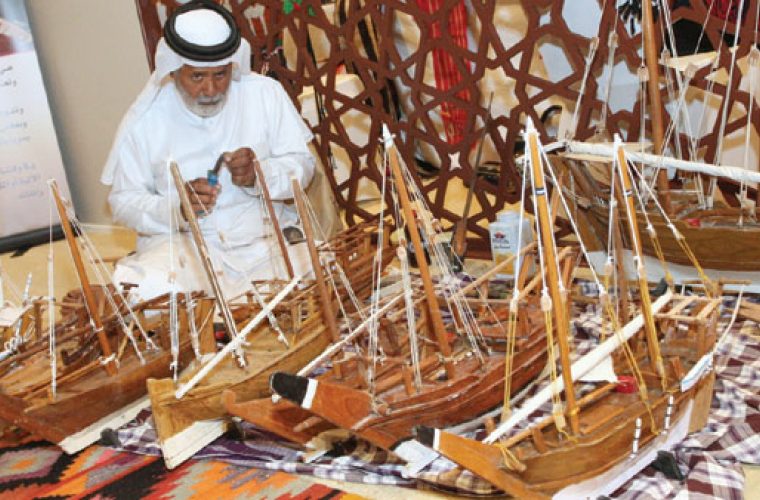 The first GCC Handicraft Exhibition formally opened yesterday at Sheraton Doha Resort, showcasing a variety of unique products from the region.
Qatar Tourism Authority chairman Issa bin Mohamed al-Mohannadi and undersecretaries for Tourism Affairs in the GCC led the ceremonial ribbon-cutting before touring each of the stalls at Al Majilis Hall.
Bahrain and Qatar stalls have displayed various handmade products such as gypsum engravings, miniature-sized dhows and traditional boxes (chests), attracting many visitors at the event. The Al Jasra Handicrafts Centre in Bahrain has sponsored some of its artists who excel in manufacturing the wooden vessels, to preserve the industry.
“Selling these kind of products to different nationalities promote our country and its rich history and tradition,” said one of the Bahraini artists at the exhibition.
Some items such as the traditionally designed gypsum engravings pegged at QR40, are used to decorate dhows, according to Qatari artist Mohamed. His colleague also showcased a special mattress made of dried grass which can be used as carpets in houses, mosques and other establishments. “He can finish one item in about two to three days depending on the size and how much time he spends at work,” said Abdullah al-Haddad, a Qatari box-maker and entrepreneur. His father taught him to make traditional boxes when he was 15 years old.
Al-Haddad disclosed that the Ministry of Culture, Arts and Heritage has been encouraging them to preserve Qatar’s culture and tradition.
Some exhibitors like Fatma Maszouq from the UAE shared her experience on how she produces her handicrafts such as home decors made of palm tree leaves.She admitted that many of her items, which are used as mattresses, food and medicine containers, dress bags and fans, are sold to rich people in her country.
“The value of these handicrafts is high compared with ordinary ones because they were made with passion and hard work, so people who buy them normally understand why they are expensive,” Maszouq noted.

Source: http://www.gulf-times.com/qatar/178/details/457974/unique-creations-on-show-at-handicraft-exhibition
Omani artist and jewellery designer Naima Abdullah al-Maimani, a first time visitor to Qatar, sells beautifully-designed bracelets and necklaces. Prices range from QR200 to QR2,500. “This is a good opportunity for us to showcase our products in different countries like Qatar, which is very hospitable,” she said.
Saudi Arabian artist Arrafy Ebrahim is featuring his calligraphy book which contains some of his works while his colleagues are showcasing some personal accessories for various ages and home decors.
Like other GCC countries, Kuwait is also featuring miniature-size dhows which reflect the rich cultural heritage of the region.