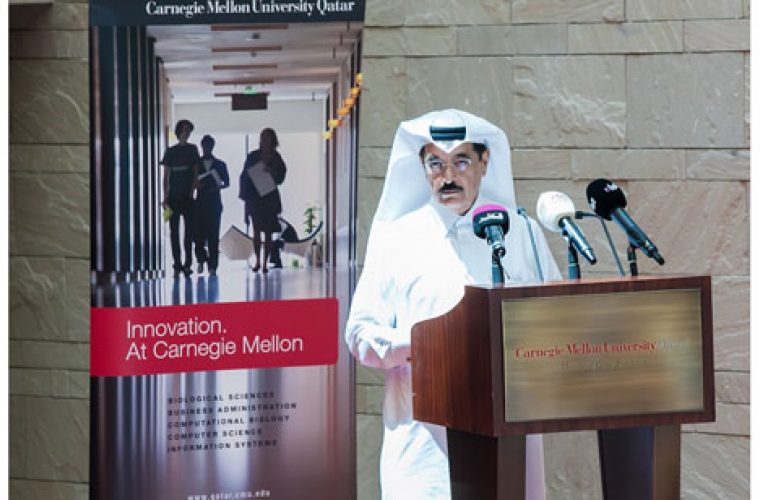 The Minister of Culture, Arts and Heritage H E Dr Hamad bin Abdulaziz Al Kuwari stressed the importance of preserving and promoting Qatari culture and heritage and Arab and Islamic identity at the conclusion of the ‘Travelling Through Arts and Times’ exhibition at Carnegie Mellon University in Qatar (CMU-Q).

The expo was a collaboration between Sheikh Faisal bin Qassim Al Thani Museum and CMU-Q under the patronage of the Father Emir H H Sheikh Hamad bin Khalifa Al Thani.

At the concluding ceremony attended by the Minister of Energy and Industry H E Dr Mohamed bin Saleh Al Sada, Dr Ilker Baybars, Dean and CEO, CMU-Q, leaders of business and academia, Dr Al Kuwari announced that Qatar had successfully registered falconry on Unesco’s Intangible Cultural Heritage List, and was planning to add Arabic coffee and Al Majlis to it.

In his lecture on ‘The role of private museums in the development of culture and the definition of the national and Islamic heritage’, Dr Al Kuwari said culture and the preservation of national and Islamic identity were crucial as Qatar undergoes significant economic and social development. “Development leads to advancement, but not at the expense of identity and heritage. Identity is one of the most important topics in the national strategy and Qatar National Vision 2030.”

He underscored the important role played by individuals and the private sector in the promotion of culture and heritage in Qatar and praised Sheikh Faisal for his role. He welcomed the active role played by universities in educating young people on the Qatari history and society and encouraged further collaboration in the future between society and higher education.

Sheikh Faisal spoke of his “passion” for his world-renowned museum in Al Shahaniyah and his life-long commitment to raise awareness and improve understanding about Qatar’s history, culture and heritage. “What makes me happiest is the foundation of this museum. We have developed a real relationship with the people of Qatar. I feel that I am serving the state. This is a passion very close to my heart. When I was a young man, I was driven by business. Now my greatest passion is the museum.”

He said the success of the temporary exhibition at CMU-Q, which drew visitors from across the world, had encouraged plans to have mobile exhibitions with key artefacts from the museum travelling to Europe and the US.

He said the aim was to “disseminate our thinking and ideas about Arabs and our society.

“We want our exhibits not to stay static in Qatar but to open up to other parts of the world”.

This would complement cultural outreach programmes the museum runs in schools and universities in Qatar. He also announced plans to build a lecture theatre at the museum to host educational sessions on Qatari history.