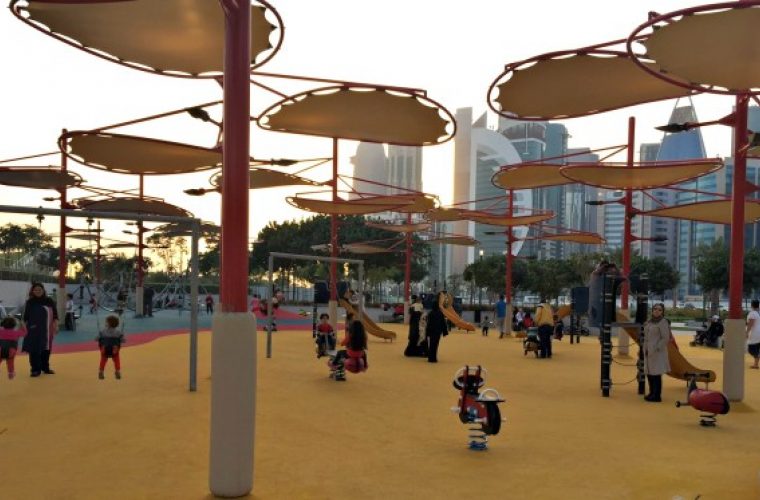 The four-level, 2,800-capacity underground parking at the newly-opened Sheraton Park will open either by the end of this month or early next month, once the approval from the General Directorate of Civil Defence is obtained, it is learnt.
The new public park in front of the Sheraton Doha Hotel is expected to provide a new refuge for many residents. Located within Qatar’s central business district in West Bay, the new park is ideal for families to spend weekends.
A mini playground and a number of fitness equipment, also present in many public parks in the country and the Doha Corniche, will be major attractions.
There is a seven-hectare public garden with a variety of landscaping elements and water features such as fountains and mini water falls.
Steve, a Doha resident, who took his family and grandchildren to the park over the weekend, said he hoped to see the toilets, restaurants and cafes open in the coming days.
A source told Gulf Times that they were still waiting for the final inspection of the Civil Defence before opening the establishments, including the toilets and the underground parking.
“We are double checking all sections to ensure the safety of everyone. There are some areas that need finishing touches but everything is
almost done and ready,” he said.
One of the workers said they had separated the vehicle entrances from the exits of the car park to ensure safety and to prevent traffic congestion.
“This arrangement will help to avoid long queues of vehicles, when entering and leaving the parking area, especially during peak hours and during the weekends,” he said.
The source noted that the underground parking was expected to charge fees once fully operational since pay booths had been constructed at exit points.
Besides having enough entrances and exits, it also has a direct link (tunnel below the Corniche road) to the newly-opened Doha Exhibition and Convention Centre.
According to the Qatari Diar Vinci Construction website, certain parts of the car park building are air conditioned.
“Wall, floor and ceiling finishes are of high quality. The project includes about a dozen elevators as well as a freight elevator and for the first time in Qatar an electronic guiding system that will direct users to available parking spots,” QDVC said.