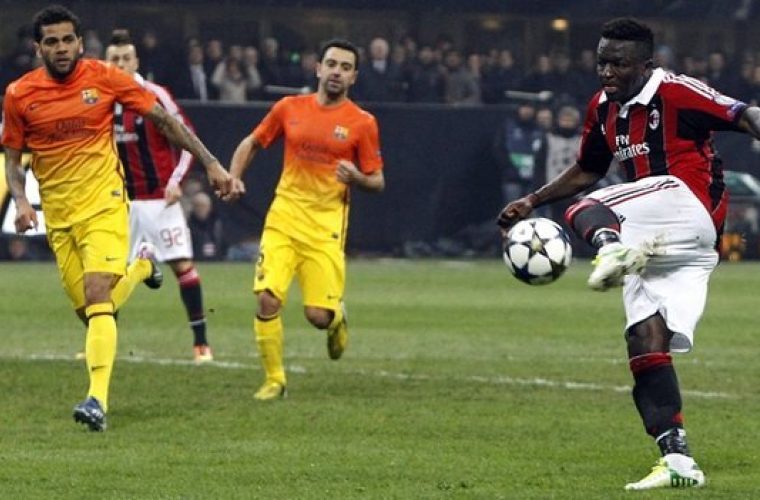 Frustrating and already damaging night for Barcelona turned into a disastrous one when Stephan El Shaarawy flicked up the ball in the 81st minute and dinked a perfect assist into the path of Sulley Muntari to guide the ball into the bottom right corner. It was the second shot that had hit the same spot after the impressive Kevin-Prince Boateng opened the scoring after 57 minutes. Although the assistant coach, Jordi Roura, said he was "absolutely convinced" his side will still go through, it leaves a largely impotent Barcelona with a huge task in the second leg. It leaves Milan in a position as perfect as it appeared implausible. A huge banner was unfurled over the south stand before this game: "We are history," it declared. Milan may not be what they were, seven times winners of this competition, but they deserved the 2-0 victory and, as the noise roared round San Siro and shirts were thrown to fans, this felt like a historic night. Asked if one day he will sit by the fire and tell his grandchildren about it, Massimiliano Allegri smiled. "It was," he said, "a great night." He insisted, though, that the tie was still open. For the first time in 15 games Lionel Messi did not score or even threaten; for the 10th consecutive game Barcelona did concede. The warnings signs were real and for the Catalans this was reminiscent of a recent history they would prefer to forget. There were memories of Chelsea and there will be talk of Plan B. Gerard Piqué spent the final minutes as an emergency centre-forward but he, like his team-mates, could do little. "We hardly let them have a shot," Allegri said, correctly. Barcelona managed two shots on target, Milan six. How, it had been asked, would Milan stop a side that have scored 80 league goals? Bojan Krikic had joked that the only way was for three or four Catalans to wake up with stomach ache and Silvio Berlusconi demanded a man-marking job on Messi. The coach laid a more collective trap that worked perfectly. Before the game Allegri noted: "Barcelona have 65% of the possession; we have to make sure that it is sterile possession." His analysis was remarkably accurate: at full-time the possession stats showed: Milan 35%, Barcelona 65%. Sterile, indeed. The opening 45 minutes were spent in the Milan half and much of it squeezed into a 20-metre strip on the edge of their area. At times Barcelona's touch was superb, even though Roura complained of a pitch "not worthy" of the Champions League. But that touch allowed them to evade challenges and keep the ball rather than evade opponents and create chances. "We had the game under control," Roura said. What they did not have was the lead. As the two teams concertinaed, Dani Alves had the task of skirting the wall of bodies, dashing from deep to offer the diagonal ball behind. Few were played and fewer still found him. His crosses, when they did come, rarely troubled, although one might have drawn a penalty for Philippe Mexès's handball, and it began to feel as if the Brazilian might be the key to the game – for both sides. In making those runs, and he made them constantly, Alves left a space that occasionally opened for Milan. El Shaarawy lurked, waiting to take advantage. The better chances did fall to Milan too, the clearest after 15 minutes when a lovely touch was followed by an awful one. Boateng turned a first-time pass behind Alves only for El Shaarawy to over-hit as he sprinted towards goal. From the corner Boateng hooked just past the post. Ten minutes into the second half another Boateng shot did hit the target and Milan were in front, via a free-kick 25 yards out, a goal that Roura admitted did his team "real damage". The ball was played short and, it seemed, rather loosely towards Riccardo Montolivo, whose shot flew off Jordi Alba and Cristián Zapata, dropping for Boateng. He guided the ball beyond Victor Valdés into the keeper's bottom left corner. Barcelona replaced Cesc Fàbregas with Alexis Sánchez but, far from changing the pattern, it entrenched it. Messi and Xavi put free-kicks over the bar. Christian Abbiati hardly had to move for them; he rarely had to move all night. And then, at the other end, El Shaarawy and Muntari ended the night in style. For the Milan fans it had only just begun. Source : Qatar Chronicle