U.S. Secretary of State: ‘We remain as concerned today as we were at its outset’ – GCC Crisis Updates Week 35 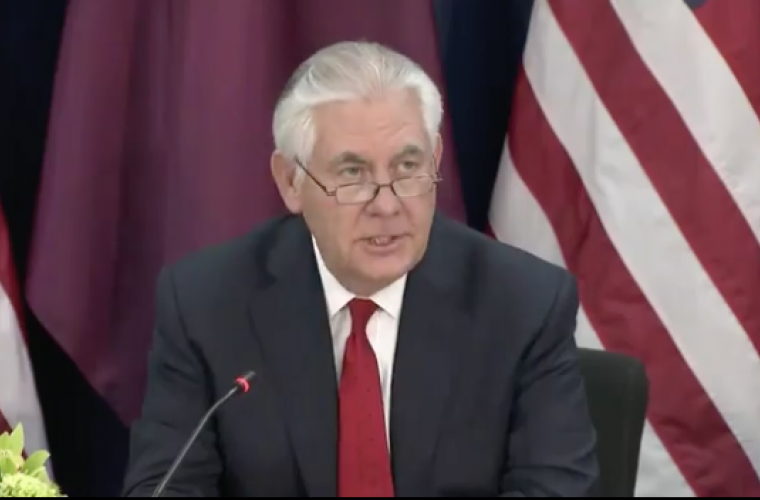 The Asian Football Confederation (AFC) stated on Saturday, January 27 that it has rejected Saudi Arabia’s request to move all matches against Qatar to a neutral territory. In a statement published on its website, the AFC expressed: “Clubs from Qatar, Saudi Arabia, and the United Arab Emirates should be played on a home and away basis in 2018, as per the AFC regulations.

In the first publicly-announced contact with the United Arab Emirates since the ongoing GCC Crisis began on June 5, 2017, HH the Emir, Sheikh Tamim bin Hamad Al Thani sent a cable of condolence to UAE President Sheikh Khalifa bin Zayed al-Nahyan upon the passing of his mother.

To date, there’s yet to be an official acknowledgement from Abu Dhabi towards the gesture of goodwill. In September of 2017, HH Sheikh Tamim, and the Saudi crown prince reportedly spoke over the phone in a conversation in which both parties discussed a willingness to find a resolution to the fallout – marking the first official contact between Qatar and Saudi Arabia since the crisis began.

In spite of the ongoing blockade against Qatar, the country’s market fundamentals remain strong. A report by The Gulf Times analyzing Qatar’s financial landscape, reinforces the nation’s resilience in terms of the crisis’ economic impact. The report states that Qatar’s Commercial Bank observed a QR 604 million profit at the end of 2017 – up by 20.4% from the previous year.

While Commercial Bank Chairman, Shiekh Abdullah bin Ali bin Jabor Al Thani admitted that “2017 was a challenging year” in spite of the blockade, he went on to confirm that “despite this, Qatar’s macro-fundamentals have not materially-changed” as evidenced in strong rating scores by global investment services Fitch, and Moody’s. Qatar currently has $35 billion USD in net international reserves at the Qatar Central Bank, and more than $300 billion USD in assests managed by the Qatar Investment Authority, and with the first quarter of 2018 underway, the country expects to further increase spending across the sectors of health, education, and construction projects ahead of the 2022 FIFA World Cup.

Marking the first of what will be an annual dialogue session, the two nations signed Memoranda of Understanding on areas of shared collaboration and interest including information-sharing on counter-terrorism, combating human trafficking, labour practices in Qatar, and strengthening trade relations, and leveling the playing field in the global aviation market.

In a statement during the Opening Session, U.S. Secretary of State Rex Tillerson described Qatar as “A strong partner and long-time friend” whose relationship they value and seek to deepen strategic ties. Qatar was one of only a few nations to sign a bilateral Memorandum of Understanding with the U.S. to counter terrorism and extremism.

Secretary Tillerson also stated that the U.S. “remains as concerned today as we were at its outset”, in relation to the ongoing GCC Crisis, expressing a need for “all parties [to] minimize rhetoric, exercise restraint to avoid further escalation, and work toward a resolution.

The U.S.-Qatar Strategic Dialogue Session comes on the heels of a January 15, 2018, phone call between U.S. President Donald J. Trump and HH the Emir to discuss ways of strengthening the partnership between the two countries to ‘bring more stability to the region and to defeat terrorism.’

On Tuesday, January 30, 2018, Saudi Arabia, the UAE, Bahrain, and Egypt condemned the results of a report by the United Nations Commission on Human Rights (OHCHR) that confirmed the actions of the blockading countries were in violation of human rights. The blockading countries stated that it was within their “sovereign right” to sever ties with Qatar in the interest of national security protection.

The objective of legal action against the hacking of Qatar News Agency is financial compensation: #Qatar Minister of State for Defense
— The Peninsula (@PeninsulaQatar) January 31, 2018

In a statement made on Twitter, The Peninsula Qatar reports that the ‘objective of legal action against the hacking of the Qatar News Agency (QNA) is financial compensation’, according to Qatar’s Minister of State for Defense Khalid bin Muhammad al-Attiyah.

Qatar accused the United Arab Emirates in July, 2017 of orchestrating the May 23, 2017 hacking of QNA’s website and social media channels, and of being in violation of international law.

Two UK human rights lawyers have called for the removal of Saudi Arabia from the United Nations Human Rights Council after 61 people who have been “arbitrarily detained or disappeared” by Saudi authorities.

Stating that the 61 arrests, carried out in September 2017, were “in breach of both Saudi and international law” attorneys Ken Macdonald and Rodney Dixon have stated, adding that they’re “part of an ongoing, established, and long-running pattern of abuse” by Saudi Arabia towards dissidents and those exercising freedom of speech.

On September 10, 2017, prominent Saudi cleric Salman al-Awdah was detained and kept for five months in solitary confinement after he was arrested for sharing a Tweet that welcomed alleged reports of reconciliation between Saudi Arabia and Qatar in the wake of the ongoing GCC Crisis. Awdah was hospitalized after his release from solitary confinement due to a deterioration of his health.

Qatar’s Deputy Prime Minister and Minister of Foreign Affairs, Sheikh Mohammed bin Abdulrahman Al Thani is slated to speak at the American Enterprise Institute in Qatar on Thursday, February 1, 2018 the Ministry of Foreign Affairs has announced. Speaking on the ‘Changing Dynamics of the Gulf’, the event will be live-streamed at 5:00 p.m. local time and can be watched here.