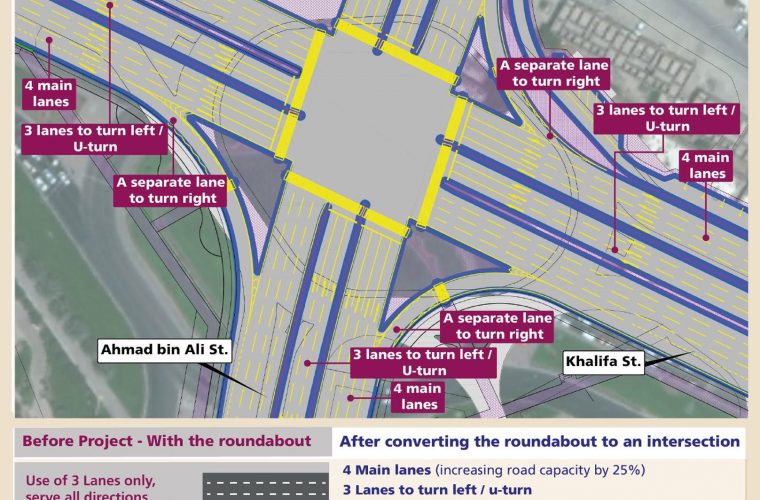 Ashghal, which is converting roundabouts to signal-controlled intersections in vital areas of the country, has started converting the TV Roundabout to an intersection.
Most traffic diversions and closures will take place during the summer break, it was announced on Wednesday.
Works started on April 1 and will be completed before the start of the new academic year.
Following this, work on the other phases of the project will start, which include widening 300m of each of the streets leading to the roundabout. It will have four main lanes and three left-turning lanes. This is in addition to pedestrian crossings that will be added on each side of the intersection.
The streets that will be widened are Khalifa, Abdul Aziz bin Jassim, and Ahmad bin Ali streets. Two roundabouts on Abdul Aziz bin Jasim Street will be converted to signal-controlled intersections.
The traffic signal at the intersection of Ahmad bin Ali with Al Jazira Al Arabiya streets will also be developed to facilitate access to the TV station buildings and the nearby residential areas. The works will also include the service roads in the area.
Once the project is completed, road capacity will increase by 25% to 30% and by 100% for those turning left or making a U-turn due to the three new dedicated lanes.
The waiting time at the intersection will also be reduced by about 50% as a result of connecting the traffic signal at the intersection with other signals in the surrounding streets.
Converting roundabouts to signal-controlled intersections greatly enhances traffic flow.
Ashghal had earlier converted seven roundabouts in Corniche and West Bay in addition to Dahl Al Hamam, Al Markhiya, Civil Defence, Al Thumama roundabouts and others. (Source)