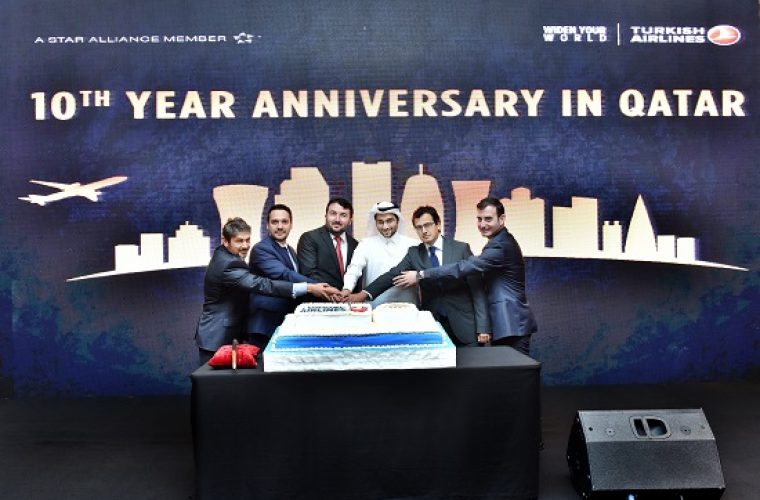 Turkish Airlines, the national flag carrier of Turkey, on Tuesday (April 19, 2016) celebrated its 10-year anniversary in Doha with a gala dinner event that brought special guests, travel agencies and loyal customers together, along with media representatives.

Mr Adem Ceylan, the airline’s Vice President, Marketing and Sales for Turkey, Middle East and Cyprus and its General Manager for Qatar, Mehmed Kurshad Caymaz welcomed guests in the presence of HE Mr. Fatih TIGRAK, Turkish Deputy Chief of Mission to Qatar.

The guests enjoyed Turkish food, live entertainment and artists’ performances, and some walked away with prizes and tickets to travel to any of Turkish Airlines’ destinations around the globe.

Turkish Airline’s General Manager for Qatar, Mehmed Kursad Caymaz, informed the media during an event at the St. Regis Hotel, that the company’s passenger traffic at Hamad International Airport has been steadily increasing.

“Today we are here to celebrate ten years of our presence in the country. We started operations on March 27, 2006 and have seen remarkable growth in the market over the last ten years – our journey has truly been exciting”, Mr. Caymaz said in his speech.

Mr Adem Ceylan, the airline’s Vice President, Marketing and Sales for Turkey, Middle East and Cyprus said: “ We are delighted to have had Qatari dignitaries and the Turkish Ambassador to Qatar celebrating our 10th anniversary with us; this, of course, in addition to our loyal travel trade partners including, those from agencies and the media whose support has been endless. Qatar is one of our fastest growing markets in the Middle East and an important and dynamic market for us so we are really delighted to be growing our operations here.”

Turkish Airlines operates two daily flights to Hamad International Airport in Doha from its hub in Istanbul, and one weekly cargo flight on a wide body freighter. For the rest of 2016, the company forecasts that it will see an increase of over 25 percent in passenger traffic.