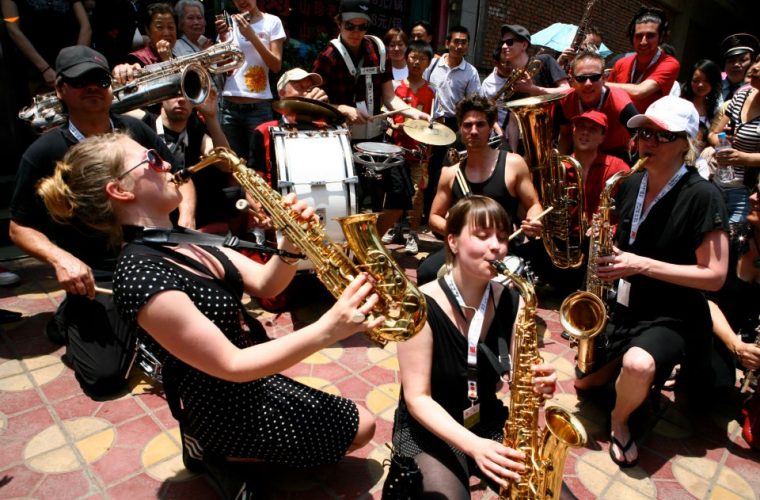 After the first successful weekend of this year’s Qatar International Food Festival (QIFF) at the Hotel Park the Embassy of the Federal Republic of Germany and the Goethe-Institut Gulf Region bring the Hamburg music success “TÄTÄRÄ” to Doha. The participation of the German musicians and entertainers in the program of the popular festival is part of the Qatar Germany 2017 Year of Culture.

HE Hans-Udo Muzel, Ambassador of Germany to Doha, comments, “After the first weekend with German folk music from the South of Germany we bring you this weekend a German brass band from the North – Tätärä from Hamburg, a true sensation of funky brass and handmade music. And of course you can also enjoy the ‘Curry Wurst’ at the German ‘Wurstbude’ this weekend.”

Hassan Al Ibrahim, Chief Tourism Development Officer at QTA, said “QIFF invites everyone to come together and enjoy various expressions of Qatar’s diversity and multiculturalism. The prominent presence of German musicians, artists and performers in the Festival’s lively entertainment schedule has undoubtedly enhanced festival-goers’ experiences." He added, "QTA is honoured by the opportunity to leverage QIFF as a platform to promote bridges of understanding between the two countries for the Qatar-Germany 2017 Year of Culture.”

TÄTÄRÄ considers itself the most mobile band of the world and they will jam at the festival daily in the evenings from 6 to 8 April 2017. Tätärä’s trademark is handmade and funky brass music. Sax, trumpet, trombone, flute, tuba and a strong team of percussionists create a strong and energizing sound. Tätärä plays not only to the audience, but with the audience who become part of the show. The band travels with a cast of eleven musicians to Doha. They play their exciting mix of styles such as rock, jazz, beat, groove, swing, Britpop, funk, punk up to classic.

More entertainment offers magician Werner Link who will bewitch the Doha audience with his tricks. He has been performing as a magician since 2000, and over the years he also included balloon art and medieval juggling performances into his repertoire. Today he combines magic tricks with a historic form of art, appearing as a medieval magician at historic festivals all over Germany since 2004. In 2016 he was invited by the Goethe-Institut to show his historical magic trick show during the Janadriyah Festival in Riad. He will perform at Qatar International Food Festival from 4 to 8 April 2017 during the evening hours.

If you have not tasted the popular Berlin “Curry Wurst” snack yet, then pass by the food stall “Wurstbude” of the Doha-based German event agency Premium Entertainment.

Qatar Germany 2017 Year of Culture is a year-long program designed to deepen understanding between nations through the mutual exchange of arts, culture, heritage and sport, developed by Qatar Museums in partnership with the Goethe-Institut Gulf Region, the German Embassy in Doha and the Embassy of Qatar in Germany.

All events of the festival program are free and open to the public. The festival area is open to the public on weekdays from 2pm to 10pm and on weekends from 2pm to 11pm. Please refer to our website for a schedule of the German program acts. The Hotel Park carries four levels of underground parking with over 2,500 spaces that makes the venue easily accessible for thousands of visitors to enjoy the festival with ease and comfort.