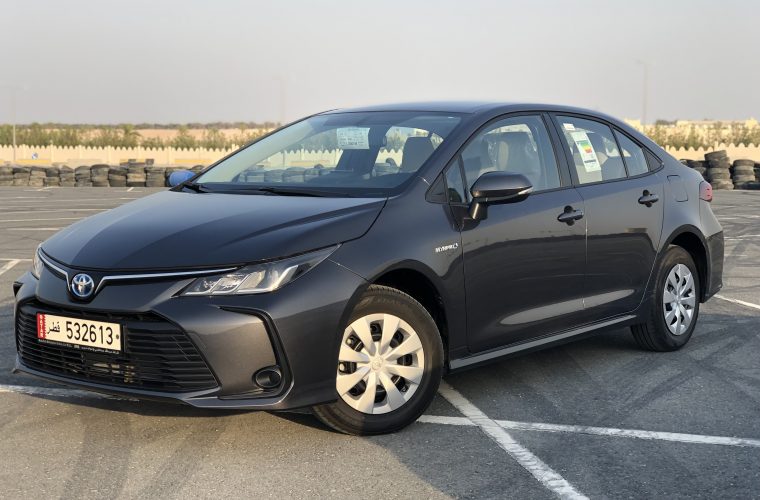 When it comes to buying cars, the market in Qatar gives you a lot of options from brands like Toyota, Honda, Mitsubishi and so on.

When it comes to Hybrid cars though, the story is totally different. You have choices from Toyota, Lexus and Hyundai in Qatar only, which means the choices are less, making it easy to pick up the one in your budget.

Last weekend, we were handed over the keys for the brand new Toyota Corolla 2020 Hybrid - the first-ever Hybrid car in the Corolla line up, and we think if you’re in the market for a Hybrid car, Corolla Hybrid should be number 1 in your list.

First, let’s discuss a little about what Hybrid Technology is, what it does and what makes it special.

Hybrid Technology is not new. In fact, it was introduced for the first time to the public in 1997 in the form of the first generation Prius (yup, it’s more than 20 years old). Since then, Toyota has sold more than 11 million Hybrid vehicles and saved 90 million tons of CO2 compared to the sales equivalent of a normal Internal Combustion Car.

Enough history about Hybrid Technology, let’s talk about what it does!

Internal Combustion Vehicles, while great for highway driving and covering long distances, have a fuel economy that’s hindered during stop and go traffic which is where Hybrid technology comes in.

Hybrid Technology combines the Internal Combustion Engine with Electric Motors. Using the combination of these, you get the best of both worlds. Since the car only runs on electric motors during slow speeds or stop and go traffic, it reduces the amount of CO2 emitted from the car which not only saves fuel but also protects the environment (Isn’t that lovely?).

In layman’s terms, there’s an electric motor along with the battery sitting between the rear axle of the car. This motor is active most of the time during stop and go traffic, slow driving speeds under 50 km/h and below, thus, saving you fuel.

We also hear a lot of myths about Hybrid Technology. Let’s bust them one by one:

1. Hybrid Technology is new, so nobody wants it because they aren’t sure if it’s worth it.

Wrong! As previously mentioned, Hybrid Technology was first introduced in 1997 and it’s only here to stay. Car manufacturers like Ford, Porsche, and even Ferrari, have started using Hybrid Technology to boost the fuel economy and power of the car.

2. Hybrid cars are difficult to manage due to their complexity.

Hybrid cars if anything are totally like normal cars, except they have an electric motor to boost the fuel economy. You won’t even notice it’s there. The only thing you’ll notice is how smooth and quiet your car is most of the time, due to the electric motors which do most of the heavy uplifting.

3. Hybrid cars needs to be charged.

The best thing about Hybrid cars is that you don’t have to worry about charging the electric motor battery. It recharges itself using the gasoline engine and regenerative braking (but, more on that later!).

4. Hybrid cars don’t actually help to save the environment

This myth, again, is wrong. As mentioned earlier in our article, Toyota alone has helped to save around 90 million CO2 gases. Imagine this number will only grow once other manufacturers start offering Hybrid cars more aggressively.

While this may be true on our side of the continent but the long term savings in terms of fuel can actually minimise the cost of ownership. With Woqod changing the fuel price every month, Hybrid can only help in saving more. Imagine if the government starts offering incentives to Hybrid vehicles? Like a fixed fuel price? The savings will only increase. For example, the US offers tax rebates on Hybrid and electric cars, thus, making the car cheaper to own compared to normal gasoline cars.

Those people who have never driven one will say that ‘Hybrids are slow’, but, in fact, this is totally wrong. Hybrids, due to their electric motors, have instant torque and feel quite fast compared to a normal gasoline/petrol car. Did we mention Ferrari uses the Hybrid system as well?

This, again, is wrong. They don’t require any ‘special’ maintenance compared to normal gasoline/patrolled cars. In fact, Toyota Qatar offers eight years and unlimited-kilometre warranty on the Hybrid Battery system. Isn’t that such a relief?

Looks are subjective. For example, the Toyota Prius is the most aerodynamic car, beating a Mercedes S Class, Nissan GT-R and more!

Now that we’re clear on what the Hybrid actually is and what it does, let’s discuss how our time with Corolla Hybrid 2020 was:

This is the first time ever that a Hybrid variant is offered in a Corolla line up. The new design along with the new powertrain makes it look beautiful and perform great for it’s class.

The new Corolla is both lower and aggressive compared to the previous design, giving it a low centre of gravity and sporty feel. While the car’s wheelbase is the same as the previous model at 106.3 inch, the similarities end there. The front and rear track of the car is wider giving it a bolder and more aggressive look, making the ride grippier overall.

The interior of the car is redesigned for the new model giving it a drastically different look from the inside. It’s more spacious, driver focused and, can we say, a no nonsense approach. It doesn’t have a bunch of buttons or useless things, thus, making the interior really minimal and pleasing with that two toned colour.

All variants of the car come with the standard 7” touchscreen, multi-information display in the gauge cluster and reverse parking sensors. By doing this, Toyota is introducing features which were once considered a luxury to the masses. Remember: Toyota Corolla is the most sold car all over the world. It also comes standard with a single automatic AC!

We got the Hybrid model in our hands to spank it around and see what it’s like to drive on a daily basis. Let’s start with the actual drive. Not only is it smooth from the get go, it’s smooth all around. There’s little to no wind noise making the cabin comfortable and quiet.

This Hybrid variant comes with a 1.8L gasoline engine producing 121 horsepower along with a twin electric motor producing 71 horsepower for a combined power output of 122 horsepower, which might seem nothing but push the accelerator and the car squeezes power out of nowhere. Given it’s low weight and Hybrid powertrain, this is not unbelievable. The fuel economy of the car is 27.6 km/l which is massive for it’s class. Who doesn’t like saving fuel and a powerful car at the same time? Nothing can come close to this, due to it’s Hybrid powertrain.

We all know how roads in Qatar can get bumpy sometimes, but thanks to the new multilink rear suspension and upgraded chassis rigidity, the ride is smoother than the previous generation.

One place where this model makes a compromise is rear legroom. Due to its aggressive styling and body lines, the rear headroom space is a bit less compared to the previous generation which means you can only seat one tall friend in the front or that tall friend has to make a compromise on the back seat… :P

Now, you may be wondering how the electric motor batteries are charged. Enter regenerative braking; basically, it’s the same as normal cars except, instead of wasting the heat energy generated during braking, it uses that to charge the batteries. Neat! This is all visible in Corolla’s multi-information display in the gauge cluster showing you real time power usage and remaining battery charge.

If you’re feeling too environment-friendly you can also drive the car in EV only mode for x kilometres. However, that’s good for, let’s say, a small run to your nearest grocery store or, as we say here, the ‘bakala’. :D

Now, let’s do some math and see how the Hybrid Corolla fares in terms of saving over the long run. Let’s assume an average person in Doha drives 50 kilometres a day and the price of the fuel is QR 2 per litre. Given the car consumes a litre of fuel for every 25 kilometres (Toyota claims 27.6), you’re only consuming QR 4 worth of fuel everyday. Let’s add a little more to it. You know we all love our weekends and love going out and about in D-Town to explore that beautiful skyline and that brings up your average driving per week to around 450 kilometres. By doing some quick math, we came up with the table below

Now, here’s a comparison of the Corolla 1.6 without Hybrid drivetrain which gets around 17 kilometres per liter.

Now, that’s a 47% increase in fuel cost per week. Which means going for the Hybrid model, you save QR 68 per month and about QR 816 per year. Now, this might not seem a lot but over time, let’s say around five years, you’re easily saving over QR 4,000.

Now, let’s talk about the time saved because Hybrid cars can be driven more, which means you’ll be visiting the fuel pump less often. Let’s assume an average time of 10 minutes for each fuel stop and that you fill it up every week. With the Hybrid model, you’ll be filling it up every 12 days vs every seven days for the non-Hybrid model, which means you’ll visit the petrol station just twice in one month vs four times in one month. This would save 20 minutes each week and around four hours each year compared to eight hours in a regular car. That’s some valuable time saving :)

This concludes our review of the Corolla 2020 Hybrid.

What do you think? Is your next vehicle going to be a Hybrid? Chime in the comment section below. Like and share the review - it keeps us going!