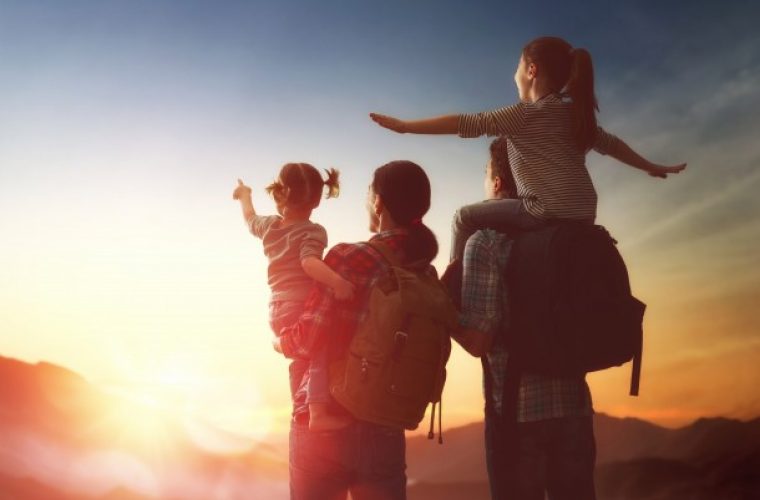 I always knew I would move away and live at least part of my life as a expat. In a way, I suppose, both my parents were expats (my mother moving from Australia to England, and my father from England to Australia), and they told of the most amazing stories and adventures not only in the countries they moved to, but also the countries they visited.

However, I never once thought I would end up in the Middle East. Not once was it ever on my radar, until suddenly in 2010 my husband got a job in Qatar – a country I couldn't even pronounce, let alone point out on the map. Raising children is tough – but raising an expat child in the Middle East where excess and luxury abound, (a very expensive sports car becomes just another ‘nice’ car), and striving to avoid any sense of entitlement so they can have some form of ‘normal’ upbringing like you had, is exceptionally tough.

So, here are my Top 5 ways you know you’re raising an expat child:

1. They’re more comfortable on a plane than at home.

Their level of familiarity on planes is off the scale, as they've taken so many they could fly the things. A quick weekend trip to Dubai, a long weekend in Sri Lanka, seeing family even involves getting at least one, if not more, flights. My son thinks we take the 'air car-car' to the mall that's how often he’s been on planes – (one can only dream about that life which would involve no traffic, or finding a spot to park!)

If we ever move back to the UK and settle down, I have a genuine fear for the time my son asks a classmate how they spent their holiday break – ‘Wait, so you mean you didn't actually fly anywhere?'

2. They speak more languages in a sentence than you can count.

My nearly two-year-old son can barely put a sentence together that actually makes sense – however, his Arabic, Italian, and Tagalog are far better than mine will ever be. He manages to use them correctly, and in sentences together. ‘Ciao ate’ (Bye sister) in Italian and Tagalog, ‘Khalas salmon’, ‘Yalla Mumma’. The kid isn't even two yet and don't get me started on trying to explain all these meanings to my parents over Skype…which brings us to our next sign!

3. They have a virtual relationship with their grandparents – and this is totally normal.

In our household, our Skype sessions are more-so staring at their grandparents’ noses, or the sitting room ceiling – as even though we Skype at least twice a week, they still haven't worked out how to use it. When we actually do see my son’s grandparents in person one or two times a year, he actually picks up the phone or iPad and tries to talk to them because he’s so used to seeing them through a screen he’s forgotten that, actually, this week Nana and Grandpa are right here.

4. Malls are a daily occurrence.

They see visiting indoor theme parks and excessively large malls with trees in the middle as part of their normal daily routine, almost their second home especially during the hot summer months. Moving back to anywhere that doesn't have at least one mall with a ski-slope in it will take some huge adjusting.

5. They have friends from all over the world…

…and from all nationalities, with names I secretly can't pronounce but sound so exotic I can't help but love. Where else could you have a Colombian, Lebanese, Qatari, Egyptian, Indian and American as your friend? Every day I stand back watching these kids play so happily together – not caring about religion, race, or culture, and I gain a little more hope. There really is something so magical about a very diverse group of children playing together happily.

Are you a parent who’s bringing up your family abroad – here in Qatar, or elsewhere? Tell us about your experiences raising an expat child and what you’d add to this list in the comments below. Also, don’t forget to give us a like and a share – it keeps us going!