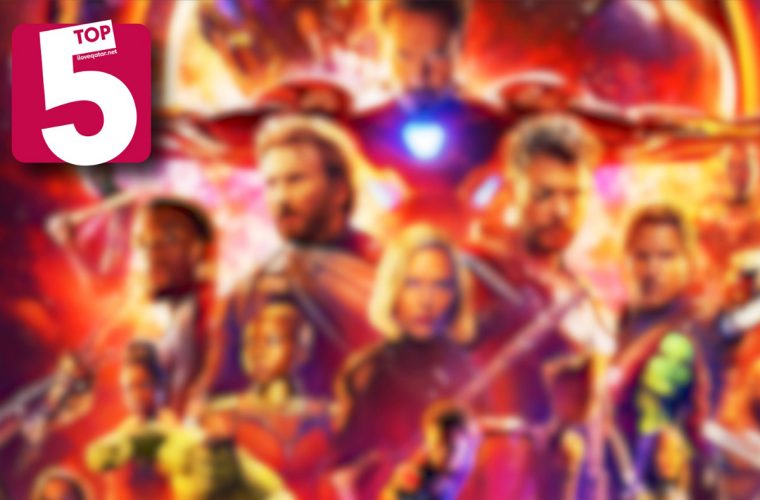 We're down to the second quarter of 2018 and as many of us would say, the current year will soon be gone -- without us even knowing! -- especially with the fast-paced everyday routine in place. And with April Fools Day welcoming the onset of the second quarter, the multinational people of Qatar can't help but get pumped up on this month's line-up of big-budgeted Hollywood movies surefire to set the bar high for their Coming Soon fellows.

Novo Cinemas Qatar (NCQ) -- home to the most innovative entertainment experiences in the GCC region -- is the go-to place for anyone craving a taste of high quality and top-notch movie viewing experience whether alone or with family and friends. Their largest IMAX theater with Laser in the MENA region is located in the equally-massive Mall of Qatar with 158 more screens available for viewing across the GCC.

With March blockbusters 'The Black Panther' and 'Tomb Raider' still playing in selected Doha theaters, here are ILQ's Top 5 blockbusters that we can't wait to watch -- in IMAX -- as soon as they make themselves available to Qatar and its die-hard movie fans population!

Disclaimer: The IMAX 4D glasses emojis corresponding the movie title and its date of release is the writer's way of letting its readers know how innovating that movie title will look like once watched in 4D or IMAX -- two of the several viewing options offered by NCQ.

Based on Kelly and Ken Nimura's graphic novel of the same name, I Kill Giants (IKG) tells the story of Barbara Thorson's -- its main protagonist -- struggles through life by escaping into a fantasy life of magic and monsters. As she faces her fears in increasingly dangerous ways, horrible giants threaten to destroy her small town -- a catastrophe that the teen should put an end to. This is Director Walter's debut feature film, as he writes shorts mostly in the past. Its poster says that IKG has the same producer as the Harry Potter movie series, which is also based from a series of novels by acclaimed British writer JK Rowling. At the time of writing, IKG is getting early 'generally favorable reviews' from critics, making it a potential winner in the blockbuster race.

The film's logline is simple: you make a sound and the 'creatures' -- who have the sharpest sense of hearing EVER -- will come to hunt you. Sounds terrifying? Wait till you learn that the family being preyed upon consists of a playful 4-year-old and yeah, a pregnant mom -- who is of course going to give birth as the plot reaches its climax! Imagine the scene in your head: how can a woman giving birth to her offspring not make a single sound? A Quiet Place may have a few references like 'Hush' and 'In Fear,' but John Krasinski -- the film's director and lead actor -- assured that the story is a whole-new bone-chilling experience. We can't wait to watch a completely silent film which will tell its story only through visuals! Now that's eerie!

Judging from the trailer, Submergence could be the most Oscar-worthy of all five entries on this list -- though critics are not approving its overly-scattered plot. Part 'The Time Traveller's Wife' and part 'About Time,' the film narrates the story of a British agent and a bio-mathematician who endured a deep emotional connection from two completely different settings. And just like the J.M. Ledgard novel where it is based from, the movie is basically going to show two stories that are on both sides of the spectrum -- a love story aspect that is rarely tackled nowadays. The film's tagline -- "No matter how far apart we are, we will always be together" -- is enough reason for it to become one of this year's most charismatic and relatable romance-thrillers.

'Big Meets Bigger' in Rampage -- Dwayne Johnson's latest action vehicle after the success of his first blockbuster for 2018 'Jumanji.' Being one of the most sought-after and currently the highest-paid Hollywood actor with a number of blockbusters under his belt, The Rock this time goes head-to-head against George -- an extraordinarily intelligent albino gorilla who has been under his care since birth but later turned into a raging monster when a rogue genetic experiment gone awry. Can Big stop Bigger from tearing North America apart before its too late in this action-packed film loosely based on a video game series of the same name by Midway Games? Well, there's only one way to find out!

Probably the most-anticipated superhero movie not only for April but for the whole year, The Avengers: Infinity War (AIW) will become the first Marvel film to see the Avengers and the Guardians of the Galaxy -- with 50+ more characters -- all in one film. In the star-studded film, Iron Man, Thor, Captain America, The Hulk, and their allies team up to defeat the powerful Thanos before his blitz of devastation and ruin puts an end to the universe. AIW also marks the tenth anniversary of Marvel Studios and its inception of the Marvel Cinematic Universe and will be the longest one at 156 minutes, following 'Captain America: Civil War' which was 147 minutes. For the best movie experience, we're encouraging you to watch the the film during its opening week. Q Cosplay usually holds cosplay events in Novo's The Pearl and Mall of Qatar branches. Who knows, you might rub elbows with Cap or Thor!

Novo theaters aim to bring an unmatched cinematic experience and create lasting memories for every customer through their wide selection of viewing options including 2D, 3D, 4D, IMAX with Laser, ATMOS and their all-new 7-Star VIP suites. Online booking, e-kiosks and the first cinema-dedicated mobile app -- available in both IOS and Android. They have branches scattered across Qatar.

To know more about Novo Cinemas Qatar, check out their details below!

Which 4D-worthy movie are you most excited to watch in Qatar this month? Did we miss anything that is worth adding to the list? Drop us a line in the comments below and also, don't forget to like and share this article -- it keeps us going!

(Cover image courtesy of The Playlist)