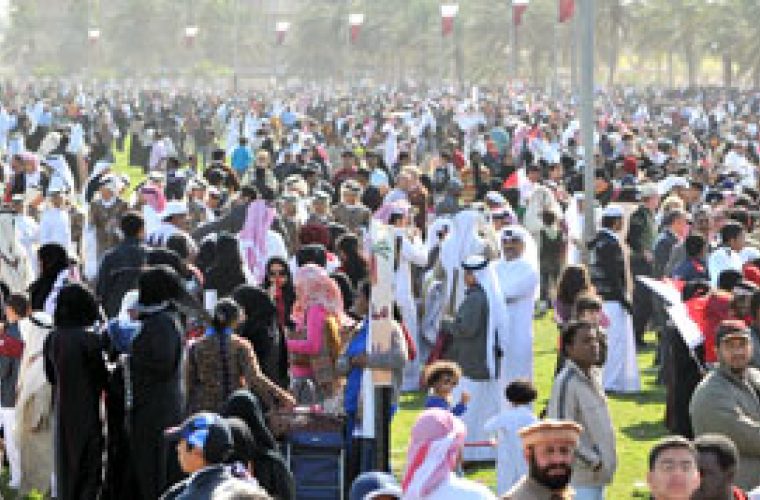 THOUSANDS of Qataris and expatriates who witnessed the National Day’s military parade yesterday on the Corniche were unanimous in describing it as magnificent. Although the area of the parade was blocked as early as 8am, large numbers of residents were very keen on being part of the event. They parked their cars away from cordoned-off area of the parade and made it on foot to the Corniche. Um Khaled, a Palestinian who was born in Doha, hailed the show as “wonderful”, saying that she was awaiting such a chance to express her gratitude for “her home Qatar.” A fighter jet manoeuvres in the sky as two birds watch their competition “This is the first time in my lifetime I have witnessed such an experience. Although I am a Palestinian, I feel that Qatar is my home. I was born here and my loyalty is to Qatar. Thanks to HH the Emir Sheikh Hamad, the Palestinians are receiving special attention,” she said. Emile from the Philippines said she braved the cold weather and attended the parade to “congratulate Qataris”. “It is our duty to gift Qataris something today. I was very keen on having many Qatari flags to gift them to Qataris as a gesture of our love for Qatar. We are living in their homeland,” she said, while observing that the dhow show was the best she liked in the parade. While expressing her satisfaction at the shows, Um Saif, a young Qatari woman, hailed the idea of changing Qatar’s National Day to mark the date when Sheikh Jassim bin Mohamed succeeded his father. “It was a great idea. Sheikh Jassim has been a symbol for our unity and solidarity. I feel happy that I would be able to celebrate the same event years and years to come. I think it was a loss for everyone who did not come out and see this big show,” she said. Ramandugam, an Indian expatriate, saw the spectacle, which, he said, was the first of its type during his 18-year long residence in Qatar as “amazing.” “Everybody is enjoying the festival mood. I have been here for 18 years. But this is the first time I have ever seen great show. I am sure that expatriates enjoy the shows equally as the Qataris do because they feel they are at home,” he said. However, it seems that Mubarak al-Kuwari, a 12-year old Qatari child, has some different reflections on the National Day. “I would like to congratulate Abu Meshaal Sheikh Hamad and wish him many returns of the National Day. But I have a small request. I would like to ask him to find us a solution for the traffic jam we have to deal with every day on our way to school,” he said. Eveline, a Canadian expatriate, hailed the shows as “great as the fabulous weather seemed to celebrate with Qatar.” “It is wonderful. I am very happy to be part of such experience where all the people are happy. It is fabulous. When I think back home as the weather is chilling with the temperature minus zero, I feel the difference,” she said, while observing that the organisers should have distributed some sort of flyers for the programmes. “It would have been better if we have been provided with schedules and episodes of the celebrations so that we can be in the right place at the right time,” she added. Units from different sections of the Armed Forces and Interior Ministry participated in the parade. They were led by equestrian soldiers and others on camel back, clad in traditional uniforms. The parade was met with a great applause from the public who waved the Qatari flags and chanted slogans and carried banners expressing their national feelings. The parade included a parachutist’s dropping, the police in their garments and uniforms of the 50s, 70s and 80s periods along with Arab horses and camels. It also included a procession of the old and modern armoured vehicles, and equipment dating back to 1949. However, the most spectacular part of the parade was the air force show which captured the attention of all those on the Corniche. A squadron of fighter jets described the number 18, the date of the National Day, with their vapour trails in maroon, the colour of the Qatari flag. http://gulf-times.com/site/topics/article.asp?cu_no=2&item_no=261698&version=1&template_id=36&parent_id=16