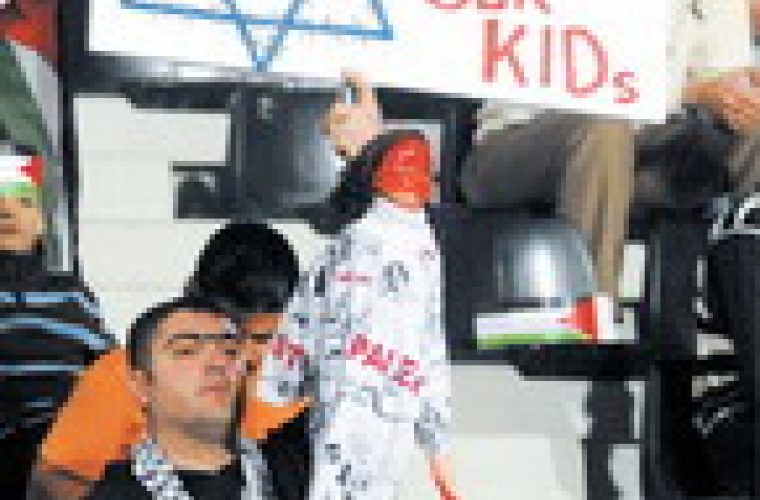 Around 15,000 people gathered at the Qatar Sports Club to protest and show their solidarity with the Palestinians in Gaza Strip who suffering from Israeli bombardment for the sixth day yesterday. “My family and I are here to show our support to the Palestinian people who are now suffering in Gaza. Women and children are being killed as we speak. Stop killing our children,” said Mona Youssuf, who is originally from Jordan and has been living in Doha for 10 years. “We sympathise with the people in Gaza. Including innocent lives in this conflict is a shame to humanity. It feels like they are also killing us here,” said Youssuf. People who attended the rally were carrying placards and protest signs saying “Stop Killing Our Kids” and “Stop Killing Our Children”. Children and adults were waving Palestinian and Qatari flags and some were wearing cardboard crowns with the Palestinian flag on them. “My family and I decided to come and join and show our support and empathy for the Palestinian people. We will also collect money later for the bereaved families and send it, along with our condolences, to the Palestinians,” said Ghassan Adnan, who said he had received a text message about the protest rally a few hours before the event. The gathering was organised by the members of the Doha Youth Centre, the Qatar Charity, the Qatar Student Network, and sponsored by the Qatar Sports Club. “I am a member of the Qatar Student Network and I and my fellow members feel it is our duty to show our solidarity with the Palestinians. What is happening in Gaza now is a horrible thing, they are killing civilians,” said Anas Al Ansari, 23, a student at the Qatar University majoring in Chemistry. Al Ansari said the Qatar Student Network has around 3,000 members. Al Ansari said members of the Qatar Charity were collecting money during the event to be sent to Gaza. http://thepeninsulaqatar.com/Display_news.asp?section=Local_News&subsection=Qatar+News&month=January2009&file=Local_News200901023308.xml