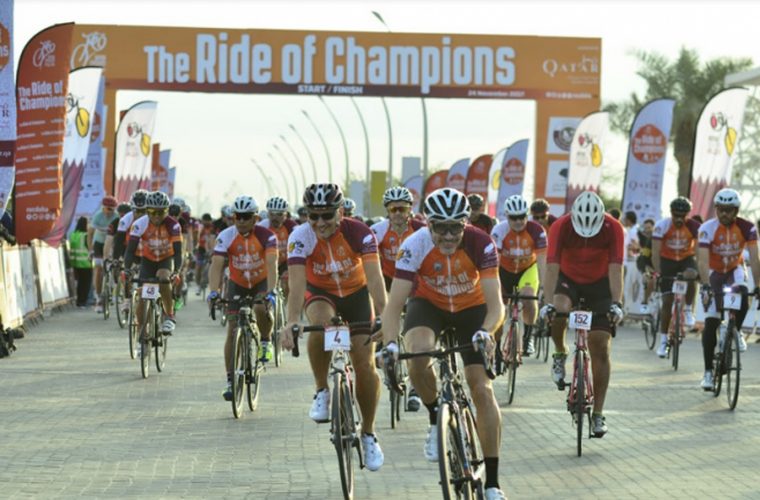 More than 1100 riders, plus hundreds of spectators and family, on Friday took part in the road, family and kids rides of the second edition of the Ride of Champions, bringing together the sports avid participants, first timers and the wider community.

Organised by Qatar Cyclists and proudly presented by Qatar Tourism Authority (QTA), the one-day cycling event drew thousands of community members who reached out to support the riders in pristine cycling weather conditions.

With the start and finish points located inside the Education City at Qatar Foundation (QF), the Ride of Champion event kicked off at 6:45am with the majority of finishers done by11:30am.

Qatar's largest mass participation cycling event, the 2017 Ride of Champions attracted cyclists from a record number of 57 countries, organizers’ said Friday. In stunning sea of orange and maroon, with participants all in matching cycling tops, more than 200 Qatari riders also featured in the event.

Notable personalities that took part in the event includedAmbassadors to Qatar from Australia, Canada, France and the Netherlands. Diplomats, school and college students, housewives, intellectuals and engineers also participated in the event.

"We are very proud of this achievement This event has been successful in every way. The organization has been excellent. The attendance shows how this sport is so popular in Qatar. The beauty of cycling is that brings people from all nationalities and all different backgrounds together. I hope that this event will support cycling in Qatar, we look forward to next year’s event to make it bigger."

“We are truly delighted to present the Ride of Champions event this year. The event has allowed diverse cultures to integrate and participate together. Riding with a bicycle around the landscape of Doha can be an extra attraction for the sport fans from all over the world to visit Qatar. We fully support the further development of the Ride of Champions worldwide and we strongly believe that the event will attract event more cycling fans from around the globe.”

Besides the road cycling event over three distances (48kms, 78kms and 137.5kms), the organisers also put together an event for beginners that was kicked off by Hamad Bin Abdulaziz Al-Kuwari, the Qatari diplomat who was recently a candidate for election of the post of the Director-General of UNESCO.

"I am always happy to feature at such events. I have been part of cycling events before. It is great to see such a huge gathering of riders in one place. This is a great place to be. It is a place buzzing with excitement. Clearly cycling is becoming very popular because we can see such huge numbers of riders. Qatar is always shining."

In keeping past tradition of safety of riders and fans, certain roads inside the Education City were closed to traffic a little before the starting time until the final rider crossed the finish line, organiser said.

"The event was a huge success. Impressive turnout and great organization. This shows the great growth in the cycling sport in the local community", Dr Al Kuwari, a regular cyclist himself, said.

“We are delighted to be part of this year’s ‘Ride of Champions’,” said Mohammed Fakhroo, Community Outreach Director, QF. “Qatar Foundation strives to support community events, and regularly plays host to activities designed to be enjoyed by the whole family. It was wonderful to see so many people come together in Education City, and to see so many happy faces this morning. We look forward to hosting similar sporting events in the future.”

"The 2017 Ride of Champions proved to be both a challenging and fun event for all levels of cyclists and Rayyan Natural Water was proud to have sponsored this high-energy event."

“On behalf of Mannai Automotive and GMC, we are proud to have an active role in this event and honored to be the official Automotive Sponsor for such an important event that creates a platform for the general community to compete in a fun way alongside each other.”

Mrs Fatin Al Sada, Head of HR and Manager of Al Shaqab Volunteer Program, from which the volunteers of the event came, said:

"There was an overwhelming response from volunteers who wanted to be a part of this event. There were 500 people ready to be volunteers and we shortlisted and finally trained 120."