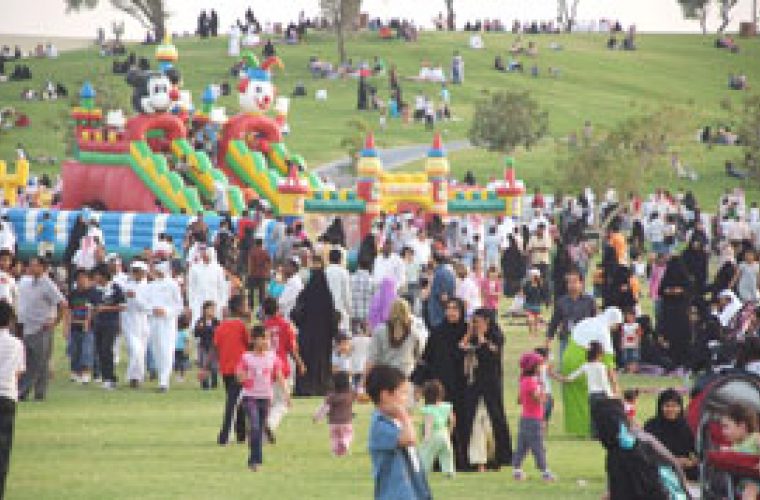 Qtel’s ‘Free Family Fun Festival’ attracted more than 50,000 visitors to the Aspire Park. The event was designed entirely by the service provider to coincide with the launch of its new concept stores across Qatar. “The fete was designed as a special ‘thank you’ for customers, for using the new generation of Concept Stores, which attracted high volumes of customers in their first weeks of operation,” Qtel’s executive director (customer service) Waleed Mohamed al-Sayed said. The function, held at the weekend, featured a range of activities for all ages including slides, inflatable rides and outdoor activities. Among the highlights of the festival was a performance of ‘Peplum & Othello’, the comic spectacular, and ‘Comic Acrobats’. The Qtel event also offered international games including ‘gladiator jousting, ‘bouncy boxing’, ‘sumo wrestling’, ‘bungee run’, ‘bungee basketball’ and an ‘electronic penalty shootout’. Al-Sayed said a huge number of free gifts and toys were distributed to children during the festival. “We designed the Concept Stores to be both advanced service centres and community resources. Qtel is deploying the resources of some of the world’s leading developers of service centres in the development of the new Concept Stores and combining that with our unmatched understanding of the needs of people in Qatar. Our aim is to provide easy access and high levels of service to people everywhere. “The Concept Stores will enable customers to fully understand the latest innovations in technology, communications and services and provide an opportunity for customers to test these. Our Concept Stores are increasingly being used as a children’s activity arena so that visiting children can be entertained with a range of child-friendly technology while their parents pay bills or shop for the latest devices.” To build upon this opportunity, Qtel has also incorporated a range of fun and informative “edutainment” options so that children can learn more about Qatar including its geography and historic locations and also about world capitals and culture. Qtel recently rolled out a new educational programme for a dozen schools in Qatar, aiming to teach children about the role telecommunications plays in the development of the nation and discuss how technology can be used to learn more about the world. As part of the programme, school children were taken on tours of some of the new Qtel Concept Stores, where experts showed them working examples of the latest mobile phones, Internet modems and digital network solutions. Each school participating in the project was presented with a Sony VAIO laptop for use in classrooms and computer training. In addition, students received an MP3/MP4 player as a gift from Qtel, to encourage creativity and enhance the students’ interest in new technology. Qtel offers its customers a wide range of products and services across fixed, mobile, broadband and Mozaic TV+ areas. The Concept Stores were designed to introduce these services. Qtel executive director (group communications) Adel al-Mutawa said, “Qtel has developed its social responsibility strategy to ensure we are supporting social welfare activities such as the Free Family Fun Festival, which brings a lot of joy and entertainment to families across Qatar. Providing facilities to families is one of the many ways Qtel looks to make a difference to the diverse communities we serve.” http://gulf-times.com/site/topics/article.asp?cu_no=2&item_no=287309&version=1&template_id=36&parent_id=16