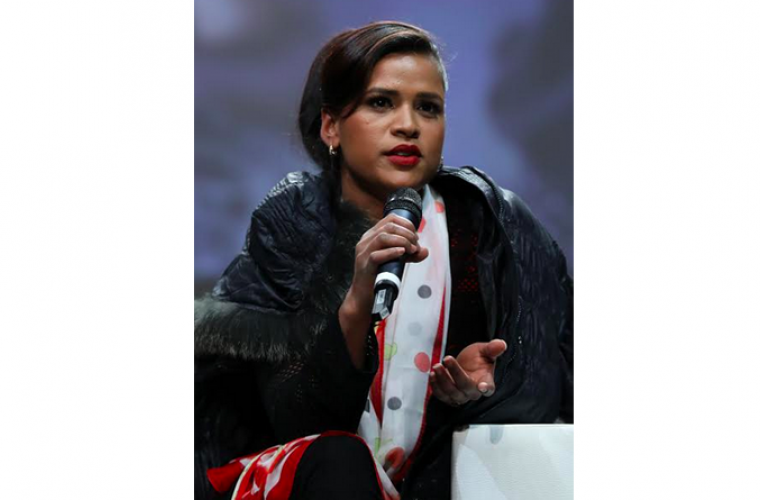 The third session of Ajyal Talks, the insightful discussions held as part of the Ajyal Youth Film Festival, presented by the Doha Film Institute, followed the screening of Kate McLarnon and Sky Neal’s documentary film, Even When I Fall (UK/2017) and further explored the issue of the illicit global trade in child captives.

Dr. Mohammad Mattar, Professor of Law at Qatar University, Sky Neal, documentary filmmaker, Elhum Shakerifar, producer and programmer and Jenna Dawson-Faber, United Nations Office on Drugs and Crime representative and moderator of the panel discussion, shared their insight of the trade during a discussion entitled ‘Not For Sale: A Focus on Child Trafficking’. Also in attendance were Sunita Sunar and Bijay Limbu, two of the Nepali child survivors profiled in the film, who are members of Circus Kathmandu, the circus/rehabilitation camp that helps child survivors of circus trafficking.

Neal, who began making her film in 2010 and has a performing arts background as an aerial artist said that when she first heard of children being trafficked to circuses, she was shocked to discover that a world she loved so much had such a dark side. “Even if they get rescued, these children are stigmatised and often rejected by their families. They have such amazing, incredible skills but they are ashamed of them,” she said and suggested that this was kind of triple punishment: first by being trafficked and abused, then by being rejected and then by self-loathing.

Limbu, who was rescued at the age of 12 after spending 4 years indentured to a circus, said that even after his rescue, he found it difficult to interact with other circus survivors. “We all felt humiliated by our experience and were depressed as a result. We treated each other badly, we were angry and harsh with one another. It was only after we started the workshops at the camp that I began to realise we could have different lives.”

Sunar, who spent 8 years in captivity, said that not a single day went by without her hoping a friend or a family member would rescue her. “The psychological and physical abuse was so bad that after some time, I began to forget things, my family, where I came from, even my name.” Even after she was rescued, recovering from the abuse took time and effort. “I was also humiliated and felt depressed, like Bijay. Then I also realised that I could put the past behind me and have a new life of my own.”

Both teens said that they had agreed to tell their stories on camera in the hopes that the film might help save other children from their experience.

Shakerifar stressed that with the film, she wanted to reframe the narrative. “These children are not victims, they are survivors,” she said to some applause. “Circus Kathmandu teaches about trafficking by storytelling. We felt the film should do the same. And because film can travel, it gives these stories a chance to reach new audiences, whether we are with it or not.”

The panel discussion was followed by an interactive Q&A session between speakers and the audience, with questions moderated by Jenna Dawson-Faber.

The 5th Ajyal Youth Film Festival runs until Dec. 4. Tickets are priced QR25 for general screening, and can be purchased 24 hours a day at ajyalfilm.com or from the Ajyal Katara Main Box Office in Katara Building 12 or Ajyal FNAC Ticket Outlet, FNAC Qatar at Doha Festival City.