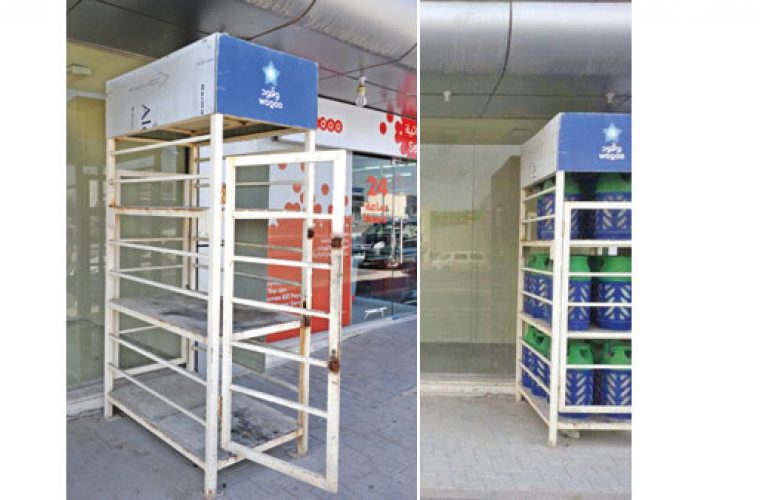 Shafaf LPG composite cylinders, which have been in short supply for some time now, have become such a precious commodity that thieves are now targeting stocks stored in Doha shops.

Two dozen such cylinders, supplied by Qatar Fuel (Woqod) for domestic use, were taken away from the Family Food Land supermarket on Salwa Road early yesterday. Sources said the theft took place between 2am and 3am.

Gulf Times had on Friday reported the acute shortage of Shafaf cylinders in the market. However, there is no shortage of the metal cylinders which Woqod supplies for domestic use, it is understood.

Shamsuddin, the manger of Family Food Land supermarket, told Gulf Times that they had closed the shop for the day around 2am yesterday. “Around 3am, we got a call from the security guard that the entire stock, including the empty cylinders, kept on the rack in front of the shop was missing,” Shamsuddin said.

There are two private security men on night duty in the area .

According to Shamsuddin, there were 24 cylinders in the rack and but for three, the rest were empty. “We had received fresh stock on Thursday night and most of them were sold out on the same night itself. We provide only one cylinder to each customer. Many customers come with three or four empty cylinders but we give only one for each customer so that we can supply more people.”

He said the demand for Shafaf cylinders was going up every day. “More than 50 people come to us daily asking for Shafaf. We stock only 24 cylinders. Woqod does not maintain a steady supply. We had planned to stop the sale of the cylinders many times due to irregular supply and the low margin of profit. But we decided to continue to safeguard the interests of our regular customers .”

The manager said the police were informed of the theft and they visited the place immediately and launched an initial investigation into the matter. “Woqod had given us an iron chain and a lock to secure the cylinders. We used to secure the rack with an additional lock . Both the locks were broken and the entire stock was stolen which looks like a well-planned operation,” he added.

This is the second time cylinders have been stolen from the shop. Last year, the store had lost 15 cylinders. “This happened when road works were progressing in the area and we had kept them at the back of the shop. We lost a good amount of money then. Still we continued with the service. This is another blow for us as we have lost almost QR8,000 this time.”

He disclosed that yesterday they had accidentally taken the picture of the rack that was full of cylinders. “Around 5pm, we wanted a picture of the nearby laundry. In the process, the entire rack with the cylinders was also pictured along with it, as the cylinder rack was near to the laundry.”

Sources said that a similar theft had taken place in a shop in the Industrial Area last month.

Irregular supply and the recent decision to stop the sale of Shafaf cylinders at Woqod petrol stations - in the aftermath of the Duhail gas explosion that killed 11 male expatriates on February 27 - are being cited as the major reasons for the sudden shortfall.