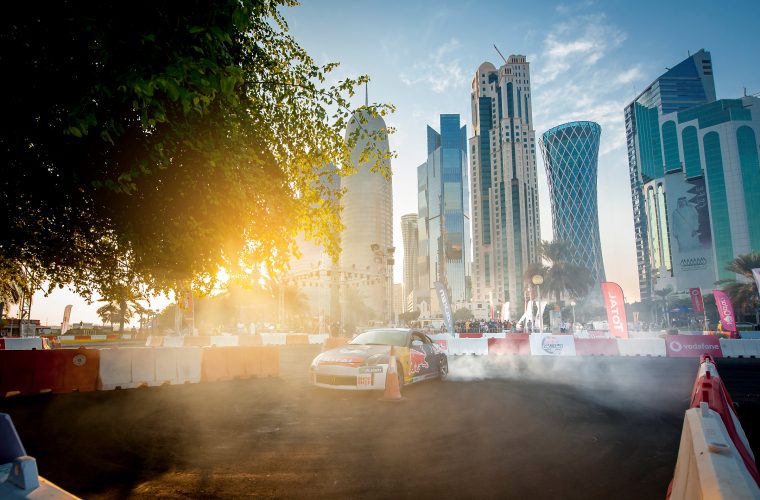 The rubber hits the road this weekend as one of the country’s most-anticipated motorsports events makes a full-throttle return to the Losail Circuit Sports Club this Friday, February 23! That’s right, the Red Bull Car Park Drift is back with its Qatar Qualifier, which is expected to attract dozens of contestants ready to showcase their skill on the track, alongside thousands of gearhead fans!

Under the support and supervision of the Qatar Motor and Motorcycle Federation and in partnership with Vodafone Qatar, Losail International Circuit Sports Club, TOTAL, and Falken Tires, this annual drift showdown will see contestants going head-to-head to display their skill behind the wheel along a challenging new course inspired by the iconic drifting legend, Abdo Feghali – the official Red Bull Athlete.

Performing at, and overseeing the event, Drift Champion Feghali says he looks forward to scouting new and returning talent at this year’s Qatar Qualifier. “We’re going to be setting up at the Losail Circuit Sports Club, which means we have even more space for the drifters to comfortably demonstrate all their skills, techniques, and control. I’m looking forward to crowning Qatar’s next King of Drift that will qualify for the grand finale in Lebanon.”

The Red Bull Car Park Drift Series has become critically-acclaimed among its thousands of fans and motorsports enthusiasts in Qatar. The event follows a high standard of safety and security, guaranteeing an entertaining environment for both the participants as well as the audience.

Contestants are observed and judged based on their skills, precision, and creativity as they aim to attain the highest scores – with the top scoring participant earning the chance to be crowned Qatar’s 2018 King of Drift. Media and community sponsors for this year’s event include I Love Qatar, Al Kass TV, Qatar Living, Cars in Doha, and Q Motors.

Will we catch you in the stands at Losail this weekend? Tell us which contestant you’re rooting for in the comments below and don’t forget to like and share this article!