H.H. The Amir's speech at the 73rd session of the UN General Assembly: The highlights 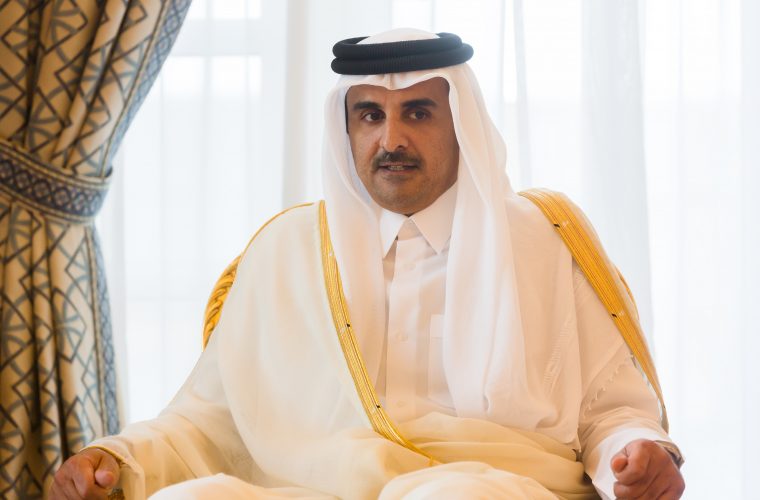 His Highness (H.H.) The Amir Sheikh Tamim Bin Hamad Al Thani addressed the 73rd session of United Nations (UN) General Assembly on the first day of the General Debate in which 35 other Heads of State and governments from Jordan, the United Kingdom, Iran, Brazil, the United States, Turkey, Nigeria, France and Equador were aso scheduled to address the General Assembly. The theme of this year’s General Debate is ‘Making the United Nations relevant to all people: global leadership and shared responsibilities for peaceful, equitable and sustainable societies’.

In his address, H.H. The Amir talked about the unjust siege which has witnessed the strengthening of Qatar and its economy and its continued growth is a proof of its vigour and consistency, and how the blockade on Qatar has harmed the reputation of the GCC countries, and the ensuing paralysis has reflected negatively on the Councils' aspired role towards regional and global issues.

H.H. the Amir stressed that it was necessary to accelerate the reforms required for the UN organisations to fulfill their responsibilities in order to achieve the noble goals of the organisation and to respond to the aspirations of the regions in conflict.

When talking about the Palestinian conflict, he pledged his support and told the General Assembly: “Qatar will spare no effort to provide various forms of material and political support to the brotherly Palestinian people and to continue to work with all the international actors in the Middle East peace process to clear the difficulties that obstruct the resumption of the peace negotiations, in accordance with the terms of reference and resolutions of international legitimacy”.

The war in Syria was also on the agenda and when addressing this subject, H.H. The Amir said: “We are facing a humanitarian, moral and legal catastrophe that obligates the international community to speed up reaching a political solution that stems the Syrians’ bloodshed, fulfills their aspirations for justice and freedom, maintains Syria’s unity and sovereignty and achieves security and stability.”

Regarding the Yemeni issue, H.H. The Amir told the General Assembly: “We confirm the firm position of Qatar, which is keen on unity, independence and territorial integrity…we call upon all the Yemeni parties…to end the conflict”.

H.H. The Amir went on to talk about the Libyan crisis and while addressing the different Heads of States and governments that had assembled together to talk about critical global issues said “We call upon all Libyan brothers to uphold the national interests and abide by dialogue…to reach a comprehensive political settlement that preserves Libya’s sovereignty and territorial integrity and realize the aspirations of its people for security and stability.” Healso announced Qatar's agreement with the UN to fight cholera in Yemen by supporting projects related to combating the causes of the disease and to halt its spread.

We express our appreciation of the efforts of the Iraqi government to restore stability and achieve national reconciliation…and value the successes and sacrifices of the Iraqi people in the fight against terrorism and extremism.

When talking about how there was a consensus that terrorism had become one of the most outstanding challenges facing the world because of the real threat it posed to international peace and security, H.H. The Amir reaffirmed Qatar’s commitment in rejecting all forms and shapes of terrorism anywhere in the world, regardless of the reasons and pretexts. He went on to add that the fight against terrorism and the protection of human rights was amongst Qatar’s priorities and how the country had developed legislative and institutional systems, fulfilled international obligations related to the fight against terrorism, its financing and promoting human rights.

In this context, H.H. The Amir believes that educating youth and their comprehensive participation represents the first line of defense for a collective security system and an important factor in fighting terrorism and building peace and stability. For this, Qatar is committed towards educating 10 million people, providing economic empowerment to ½ million people in the region and, with the UN, promoting employment opportunities for the youth through capacity building and the launch or programmes to prevent violent extremism.

Did you watch H.H. The Amir’s address today? What did you think of his speech? Do let us know what you thought about the speech in our Comments section. Like and share the article – it keeps us going!