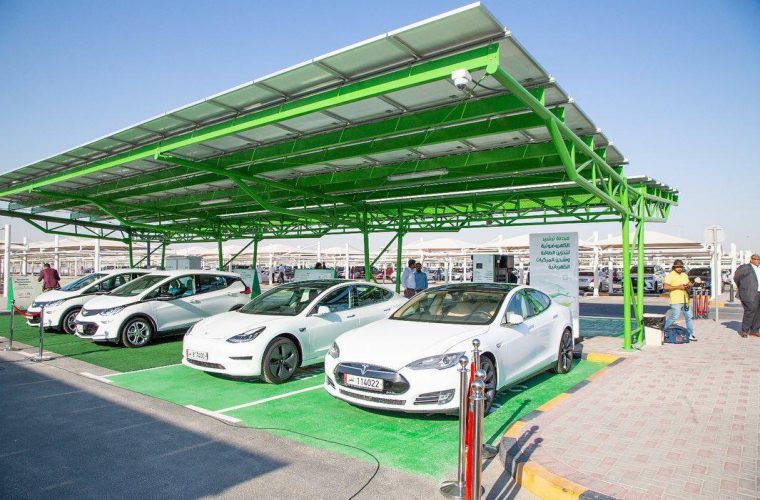 Qatar General Electricity & Water Corporation "KAHRAMAA" has launched Tarsheed Photovoltaic Station for Energy Storage and Charging Electric Vehicles today, this station is the first in its kind in Qatar where it charges vehicles with electricity produced from solar energy via 216 photovoltaic panels divided into two areas with a total area of 270 meter, which is equal to the row for 24 cars' spaces.

The event was organized at KAHRAMAA Complex at Mesaimeer in the presence of KAHRAMAA President Eng. Essa bin Hilal Al Kuwari, and H.E. Ambassador of Japan to Qatar, Kazuo Sunaga, Chief Executive Officer and Chief Operating Officer of Marubeni Power Company, Yoshiyaki Yokota, directors and managers of KAHRAMAA, senior officials from Marubeni Company, the strategic partner of the project among others.

The total power produced from these panels is 72 KW peak, and the station contains a unit that has two connections of Combo and CHAdeMO types which are compatible with different types of vehicles to allow two cars to be charged at a time with a rapid charging level of 15 - 20 minutes for the car, the maximum charging capacity is 100 KW, the station also contains a power storage unit in a battery with a capacity of 170 KW/h ,and the charging cord of 100 KW is enough to charge 3 cars.

Eng. Essa bin Hilal Al Kuwari said "this project comes within the efforts of "KAHRAMAA", represented by the National Program for Conservation and Energy Efficiency "Tarsheed", in cooperation with Japanese Company Marubeni. The aim of this station is to reduce the harmful carbon emissions by encouraging the usage of the solar energy as well as disseminating the use of electric cars in Qatar via providing a unique infrastructure for electric charging stations to achieve sustainability in line with QNV2030.

This initiative comes within Qatar National Vision 2030 which aims to transform Qatar into a developed country that able to achieve sustainable development by enhancing the diversified economy that depend on reducing the hydrocarbon; its investment is in the private sector which must be directed towards the smart knowledge and technology, he added.

He said that the station was established for use inside the KAHRAMAA complex, pointing out that there is cooperation with the Ministry of Transport and Communications to develop a complete plan to cover Qatar electric charging stations.

On the cost of the project , he noted that the cost is not the goal now and that the goal is to spread the idea and that the station came in cooperation with the Japanese company and Marubeni, he pointed out that the cost of these stations are declining, pointing out that the stations that KAHRAMAA contributed to the establishment came to disseminate the idea and support, but there is a plan to be published by the Ministry of Transport and Communications.