Syrian regime should be punished - Emir of Qatar fights terrorism 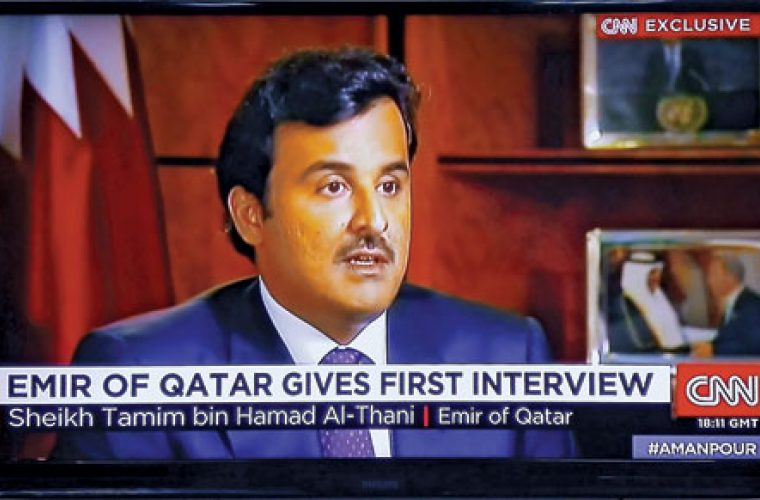 The Emir, H H Sheikh Tamim bin Hamad Al Thani told CNN yesterday that it was his father who was asked by America at the time if he could talk to Hamas and make them take part in the Palestinian poll.

“We spoke to them. It was my father who spoke to them and they (Hamas) said they will,” said the Emir in his first-ever interview to CNN which was aired late last evening.

Hamas, however, asked if the international community would accept them if they fought the election. “My father said yes because he said he was asked by the Americans for them to join (the election).”

The Emir said that Hamas is an important part of the Palestinian people. “We have some differences with some friends as they consider them as terrorists. We don’t.” The Emir said that Qatar tried hard to broker peace between the Palestine and Israel especially after 1991 and 1993 Oslo accord and in its aftermath.

Qatar, however, snapped relations with Israel after the Gaza war a few years ago which claimed the lives of many innocent (Palestinian) people. “At the same time, though, we believe that the only way to get out (of this) is to have peace between the Israelis and Palestinians.”

“Because we believe in peace and this is the only way we should all work together to put pressure on both sides to reach a peaceful solution,” said the Emir. Asked if Qatar can re-establish relations with Israel, the Emir hinted it is possible as long as they (Tel Aviv) are serious about peace and protecting the Palestinian people.

Asked about the strikes on Islamic State (IS), the Emir said: “We are doing this because we believe this is a dangerous moment in our region and we are going to stay in it for a while (everyone, and not only Qatar)”.

“We believe that we have to counter terrorism and that is why when our American friends asked if we could join, we did.”

The Emir said he didn’t agree with President Obama’s view that the strikes on Syria were not about President Bashar Al Assad at all but about ISIS.

“Honestly, no, I don’t agree. I agree that we have to counter terrorism, yes. The main cause of all this is the regime in Syria. “This regime should be punished. It is more than three years of war and the environment that the Syrian people have been living in, is creating this violence,” said the Emir.

“And we have said this from day one that if we don’t stop Bashar Assad from committing genocide on his own people this is where, unfortunately, we would be.”

“And we are in a situation now that the Syrian people who demanded their freedom are between a brutal regime and terrorist organisation.”