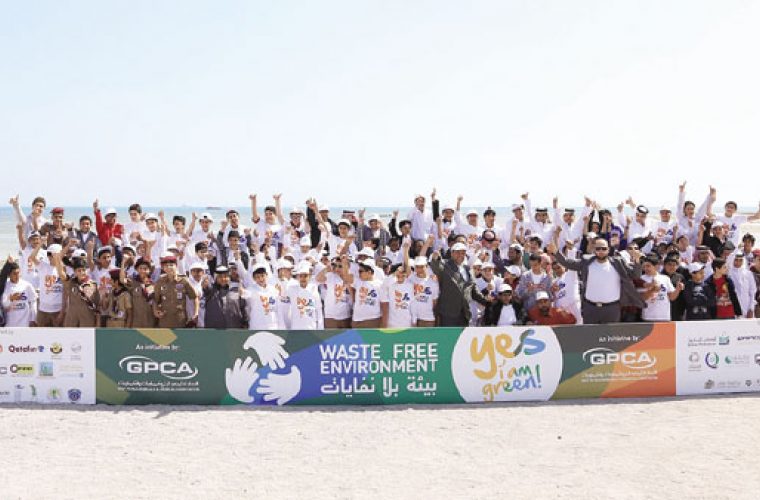 Waste Free Environment Day is an environmental initiative founded by the Plastics Committee of the Gulf Petrochemical and Chemicals Association (GPCA) and is dedicated to promoting both responsible disposal of waste and returning local environments to their pristine state – free of litter and rubbish.

For the second year in a row, the GPCA rolled out the “Clean Up, Recycle, Make a Difference – Be Part of the Change” initiative across the GCC region by mobilising downstream industries as well as the general public to take part in Waste Free Environment Day.

On Thursday, eight cities across Qatar, the UAE, Oman, Saudi Arabia and Kuwait organised various activities to raise both corporate and public awareness about the amount of plastic and other waste thrown away each year in the Gulf and to inspire them to reduce wastage and recycle.

The launch of the WFE campaign in Qatar saw a positive response from the local community and several organisations supported the initiative, highlighting their commitment to a sustainable environment.

Twelve schools and two universities participated in cleaning activities on Al Wakrah beach. The students were given four types of colour-coded rubbish bags and gloves to sort the waste collected according to their category. The clean-up was organised on a 3km beach stretch. Within two hours, the students cleared the shore of plastic waste, glass bottles and other waste material.

A number of volunteers from the community and downstream producers assisted the students in the beach-cleaning activities.

Al Wakrah beach was chosen because of its proximity to Mesaieed Industrial City, home to most of the downstream producing industries in Qatar.

In addition, “Clean Up” events were organised at select locations and awareness activities took place in schools and in four universities, highlighting issues associated with waste management and littering.

Some of the main messages delivered through the initiative are that a large quantity of trash that people throw every day can actually be reused, plastics are valuable materials and should be recycled instead of being thrown away, recycling of plastic products/materials can conserve resources and reduce greenhouse emissions, and reduction is the most effective of the “three Rs” (reduce, reuse, recycle).

The safety and well-being of all the participants during the beach clean-up were ensured by the South Police Department, who secured the entire location, and Al Wakra Hospital and its medical team.

“The Waste Free Environment campaign is a testimony to our resolve at GPCA to encourage best practices of waste management and raise public awareness about the essential societal benefits of plastics,” said Dr Abdulwahab al-Sadoun, secretary general of GPCA.

“We believe that raising awareness on the consequences of irresponsible waste disposal on the environment is one of the first steps towards shaping a sustainable future for our community and for our country. Hence, we were delighted that the WFE campaign was launched in Qatar as well,” said Dr Mohamed Yousef al-Mulla, vice-chairman and CEO of Qapco, one of the founding members of GPCA. “The ‘Clean Up’ campaign in Qatar was a real success because all the stakeholders were mobilised towards the same goal: raising awareness about proper disposal of waste.”

“For me, this is a very emotional initiative dedicated to our beloved Qatar, to the region and, above all, for the benefit of humanity all over the world,” said Dr Saif bin Ali al-Hajari,
chairman of FEC.