Everything you need to know about The Chainsmokers' first Middle East gig! 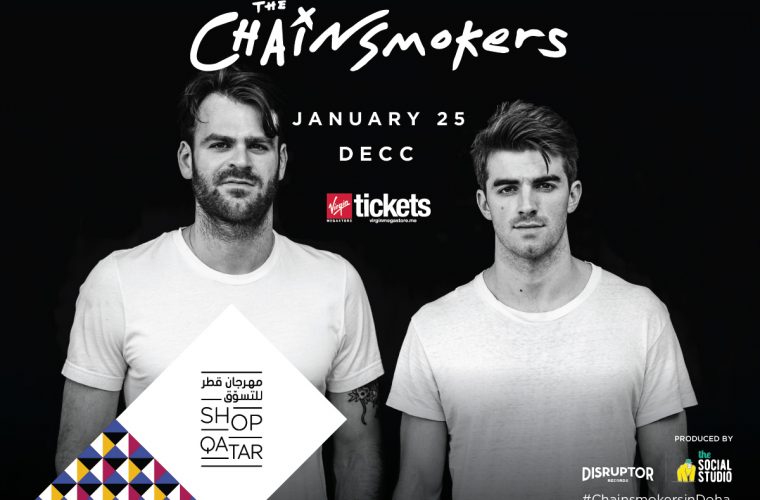 American pop-EDM duo The Chainsmokers (TCS) will be performing in Qatar on Thursday, January 25 at the Doha Exhibition and Convention Center as part of the 2018 Shop Qatar Festival, marking their début concert in the Middle East.

The Grammy Award-winning performers -- consisting of Alex Pall (32) and Andrew Taggart (28) -- is known for their mostly indie/pop/dance/hiphop hits such as '#Selfie' (2014), 'Roses' (2015), and the monster-hit 'Closer' (2016) which earned them their first Number 1 single on the Billboard chart. Their recent collaboration with British rock band Coldplay entitled 'Something Just Like This' currently has almost 1 billion views on YouTube 10 months after it was released. With their trendy musical style, TCS has amassed a massive global fan-base.

Their January 25 performance in Qatar is set to dazzle a broadened audience who will enjoy the duo's live concert at the stunning Doha Exhibition and Convention Center -- a venue which is purpose-built to cater for large-scale exhibitions and conventions.

As part of Shop Qatar, the country’s biggest shopping festival under the slogan ‘A Brand New Tradition’, celebrations will feature an array of grand offerings for their 2018 edition, and the upcoming Chainsmokers show comes second in a series of performances organized by The Social Studio (TSS) and supported by the Qatar Tourism Authority (QTA) as part of its continuous commitment towards Qatari businesses.

Hamzeh Zahr, Managing Director of TSS, says: “Music is an ever-growing platform that helps people come together, and due to its omnipresence in our daily lives, music becomes woven into the fabric of our society. We're happy to be given the support of the public sector represented by QTA to elevate the music experience in Qatar and be able to introduce such a prominent and versatile music duo such as TCS. Moreover, by hosting them for the first time in the Middle East, we think that it's time to give music fans an unforgettable journey."

When asked about their visit to Qatar, the music duo said: “We're so pumped to come! This is actually a show we've been dying for. When we got the email about it, it was a no-brainer.”

TCS’ concert comes fueled with a host of unique and engaging experiences: from a special Uber promo code, yummy nibbles from the W Doha Hotel, a trendy Red Bull Mocktail bar, glow-in-the-dark face-paint, a personalized engraving station, and an Instagram-friendly photo-booth, along with special offers in neighbouring hotels, the night is set to delight music enthusiasts and concert-goers alike.

Currently, Alex and Andrew are working on their first single release after their début album 'Memories…Do Not Open.' During a radio interview last year, the duo revealed the title track to be 'Sick Boy' which, according to Alex, is “angrier” and “darker” compared to 'Something Just Like This.'

Tickets -- though selling like hotcakes -- are still available at all Virgin Megastore outlets and online, starting at QR 275 for the General Admission category, QR 550 for Premium, and VIP tickets, with an elevated seating for QR 990.

Big names in the international music industry like Ed Sheeran, Pharell Williams, Jason Derulo, Gwen Stefani, and Luis Fonsi (the most recent), have all performed in Qatar over the last few years -- and we're pumped to add The Chainsmokers to this ever-growing list!

Have you purchased your tickets for The Chainsmokers concert yet? If so, which song are you most thrilled to hear them sing live? Drop us a line in the comments below and tell us! Also, don’t forget to like and share this article!