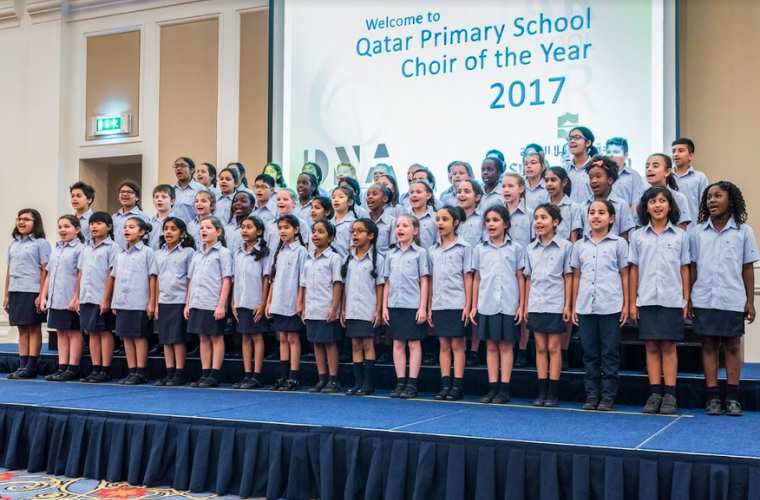 The grand finale of ‘Qatar Primary School Choir of the Year’ (QPSCoY) competition will be held in Shangri-La, Doha’s Ballroom on Monday 15th May.

Mr Greg Beardsell is a leading light in music education and performance. He is Musical Director of the Royal College of Music Chamber Choir, the Irish Youth Choir and the Cross Border Orchestra of Ireland, Deputy Artistic Director of the National Youth Choirs of Great Britain and Choral Director for the Gabrieli Consort and Players' education initiative, Gabrieli ROAR. He works worldwide as a conductor, workshop leader and presenter and has adjudicated at the Grand Finals of the UK Choir of the Year competition.

Also on the adjudication panel will be local choral music expert Ms Alena Pyne. Alena is founder and conductor of the Doha Youth and Junior Choirs, Assistant Conductor with Qatar Concert Choir (formerly Doha Bach Choir), and former assistant Choir Master with Qatar Philharmonic Orchestra’s children’s choir. Irish-born, Alena has studied and been involved in music all her life and is passionate about music education especially for children. She read music in Trinity College Dublin, is a qualified piano teacher and also studied the Irish harp. Alena is currently studying at Qatar Music Academy in preparation to take diploma exams in singing and music direction with ABRSM.

Alena and Greg will be joined on the panel by Mr Kees Wieringa, a Dutch musician of International reputation, who currently holds the post of Director of the Sheikh Faisal Bin Qassim Al Thani Museum. Mr. Wieringa was born and raised in The Netherlands, where he studied music and art at Amsterdam University. He graduated from the Sweelinck Conservatory in Amsterdam and has given many concerts as a pianist in Europe, Turkey, Indonesia, India, the United States and Japan.

The fourth member of the adjudication panel is Ms Sonja Park. Choir was a very important part of Sonja’s early childhood. Her mother was a music school and choir director and Sonja was always involved touring across the USA, Japan and Europe. Now based in Qatar, Sonja runs the non-profit foundation Moving Young Artists (MYA) with her husband Joris. Moving Young Artists supports and inspires local talents giving them a platform to grow, shine and succeed, and most importantly to share the gift of music. Since MYA's birth three and a half years’ ago they have arranged more than 25 concerts.

QPSCoY has been honoured to have Ms Dana Al Fardan as its Ambassador, Dana has been a huge support to the event which is also sponsored by her record label DNA Records.

Dana has composed an original piece which all of the choirs in the final have been learning. ‘Wings of the Falcon’ was inspired by the paths and choices that children take, and each choir has been invited to put their own individual stamp onto the piece.

The audience will also be treated to a performance by the Doha Youth Choir in the interval, giving them an indication of the high standards a choir can reach.

The schools competing in the QPSCoY final have also won a workshop with adjudicator Greg Beardsell to hone and develop their school’s choral skills after the final.

The competition is the idea of Mrs Alison Keane, Head of Primary Music at Doha College who explained, “this grand final will be the culmination of two years’ work by the QPSCoY Committee. I am overwhelmed with the amount of interest this competition has seen, and also incredibly grateful to our official sponsors Shangri-La, Doha and DNA Records who have allowed us to dream big and make this competition a reality for schools across Qatar.”

QPSCoY would like to wish all of the competing choirs in the final the best of luck!