Silatech signs three agreements to provide over 75,000 jobs for youth in Somalia 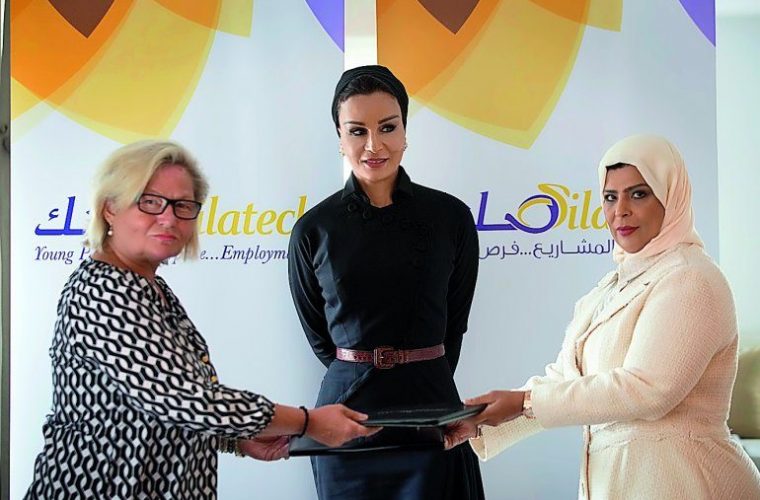 Image: H. H. Sheikha Moza bint Nasser, Chairperson of Silatech’s Board of Trustees, witnessed the signing of an MoU between Silatech, the UN Democracy Fund and Tamkeen for Development, which aims to promote and strengthen youth engagement and employability in countries of mutual interest.

Her Highness (H.H.) Sheikha Moza bint Naseer, Chairperson of Silatech’s Board of Trustees, and Ahmed Isse Awad, the Minister of Foreign Affairs and International Cooperation of the Federal Republic of Somalia, attended the signing of three agreements to economically empower Somali youth by securing more than 75,000 jobs in Somalia in New York on 24 September.

A collaboration between Silatech, American Refugee Committee (ARC) and the office of the United Nations High Commissioner for Refugees (UNHCR), the first agreement aims at providing housing and energy solutions to 1,000 families and develop local youth owned enterprises; creating around 3,000 jobs for returning refugees and internally displaced persons in the Kismayo district.

The second agreement is to support Al Amal Bank in financing youth enterprises to create 63,414 jobs around Somalia. In partnership with the Somali Institute for Development and Research Analysis (SIDRA), the purpose of the third agreement is to build the skills of 9,000 graduates and place them into jobs in the labour market.

As part of its continuous efforts to empower youth in Somalia and activate their role in developing their communities, Silatech signed the three agreements to provide solutions to combat unemployment, poverty, marginalisation and extremism.

H.H. Sheikha Moza also attended the signing of a Memorandum of Understanding (MoU) between Silatech, the United Nations Democracy Fund, and Tamkeen for Development to collaborate within their respective mandates and their common goals in the area of improving youth empowerment and participation and skills developments based on the World Programme of Action for Youth. The MoU aims at engendering, promoting and strengthening youth engagement, skills development, entrepreneurship and improving employability in countries or regions of mutual interest.

Since its inception in 2008, Silatech has secured one million jobs for youth through working in coordination with governments and international organisations and in cooperation with its partners to design and implement programmes that uproot youth out of poverty and chronic unemployment, thus empowering them to contribute to the socioeconomic development of their countries.

Cover image and source: The Peninsula