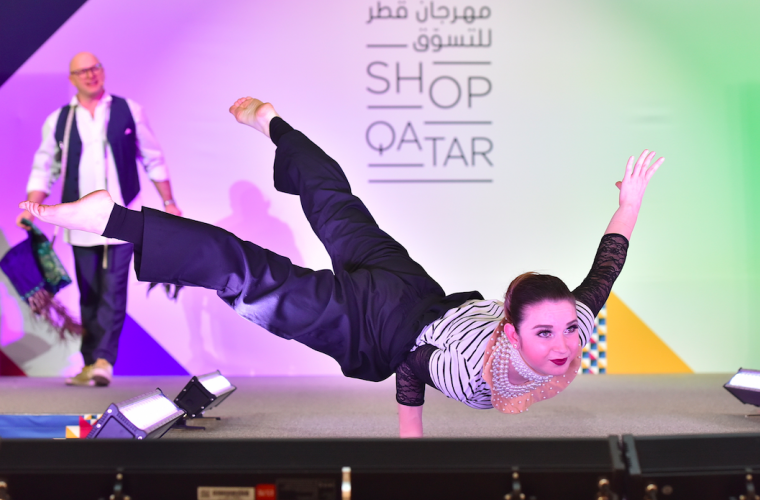 In a colourful celebration of the World’s diverse cultures, the third week of Shop Qatar (January 21- 27) took Qatar’s residents and visitors on a tour around the world. The week’s events included a line-up of unique fashion-forward events and activities at malls that sampled the arts and crafts from countries as far as Russia, the USA, Malaysia and Morocco.

The week kicked off with a three-day certified fashion course by Spain’s Alejandro Resta where 23 students learned the ins and outs of fashion design. Together they explored creating unique shapes and silhouettes, and how to develop ideas from the first sketch to the final piece.

Later in the week, the festival’s third and final fashion show brought an international line-up of fashion creations from as far off as Mexico in the West to the Philippines in the East. In a true celebration of international fashion, twelve designers from eight different countries shared the runway to showcase their Spring/ Summer 2018 collections. The designers included Kuwait’s Thaher Baqir and Lebanon’s Fouad Sarkis and the jewel in the show’s crown was a guest appearance by Pakistani superstar Imran Abbas in one of Maria B.’s creations. The display of over 120 looks included menswear, bridal, pret-a-porter and couture designs.

And on Thursday, the American award-winning pop duo, The Chainsmokers performed their latest hits at Doha Exhibition and Convention Center. Their performance in Qatar, organised by the Social Studio, marked the beginning of their 2018 tour.

And on Saturday, one of Hollywood celebrities’ favourite make-up artists, Joyce Bonelli came to Doha for the first time to share her tips and tricks in beauty and makeup with the ladies at a make-up class in the Ritz-Carlton. The LA-based makeup artist and mogul is most famously known as the mastermind behind every Kardashian’s signature cat eye and high-gloss cheekbone for over a decade.

In addition, malls participating in Shop Qatar also hosted a variety of international handicraft activities inviting mall-goers to create their own Malaysian kites, Russian embroidery and much more.

On Thursday, the third of the festival’s four raffle draws was held at Tawar Mall and 15 winners walked away with two BMW cars and QAR 500,000 in cash prizes.

Visitors and residents still have a chance to win by shopping or dining at any of the festival’s 13 Mall partners. The final draw will be held at the Festival’s closing ceremony on Thursday, 8 February at Doha Festival City’s Center Court and will feature a special open performance by Lebanese singer, Ramy Ayach.

(All images courtesy of QTA)