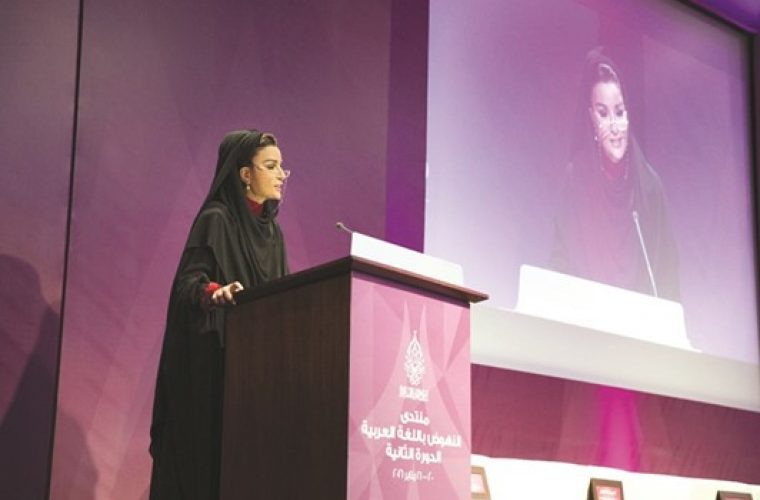 The need to effectively use modern communication techniques to preserve the Arabic language has been emphasised by HH Sheikha Moza bint Nasser, the chairperson of Qatar Foundation for Education, Science and Community Development (QF).

“Our failure to effectively use modern communication techniques has led to an inability to preserve the Arabic language. It is unfortunate that a few decades ago, the Arabic language was more prevalent in children than it is today,” she stated.
HH Sheikha Moza was launching the second Renaissance of Arabic Language Forum at the Qatar National Convention Centre (QNCC) yesterday.

The two-day forum, entitled “Linguistic Upbringing of The Arab Child — the Reality and Prospects for the Future”, is being hosted by the World Organisation for Renaissance of Arabic Language (Woral), a member of the QF.
The initiative promotes the teaching and learning of Arabic, and, therefore, supports QF’s mission to develop a knowledge-based society that upholds and promotes the region’s heritage and culture.
Sheikha Moza highlighted the challenges facing the Arabic language, some of which can be attributed to families, weak school curriculum, television programmes and globalisation.

“If we want to save our identity we have no choice but to advance ourselves and enhance the Arabic language to adjust with the contemporary era.”
Proposing several solutions, the QF chairperson called for the unification of intellectual scholars, legislatures, cultural figures, and the media to protect the Arabic language, explaining the need for it to be simplified in schools systems and encouraging television programmes to adopt formal Arabic.

According to Gulf Time She said that the misuse of communication technology had harmed the Arabic language and introduced young people to electronic linguistic gibberish.
Dr Abdulaziz bin Abdullah al-Subaie, chairman of the Woral Board of Trustees, underlines the key role of language in one’s identity and education process.

“The role of language when nurturing the Arab child is crucial in building identity and maintaining culture to master the fields of science and knowledge,” al-Subaie said. “This will support the outcome for the continuous contribution of different generations in advancing civilisation.”

Exploring development strategies, the first day of the forum featured a variety of lectures and workshops. The panels included ‘The Development of Arabic Language Skills for Children’ and “The Effects of Children’s Exposure to Current Arabic Media Content”.
Alongside the forum, the QNCC is also hosting an interactive Arabic language exhibition for children.
Various QF centres are taking part, including Qatar National Library, Qatar Nanny Training Academy, QatarDebate and Qatar Computing Research Institute.