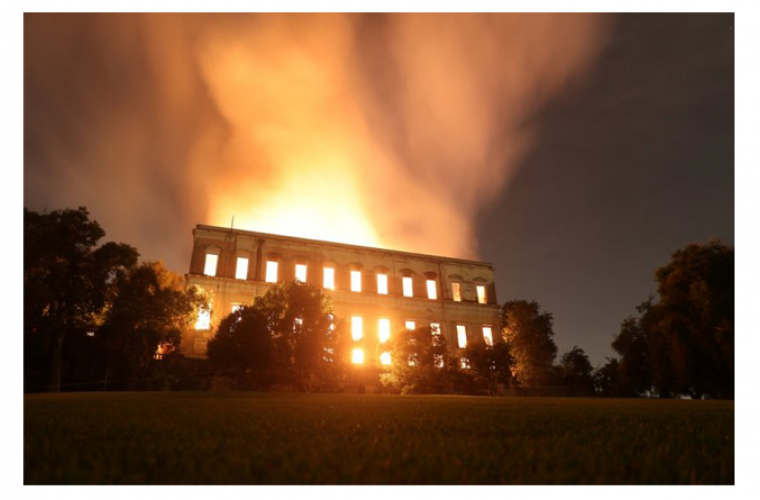 One of Latin America’s biggest cultural, scientific and historic treasures, the National Museum in Rio de Janeiro, has gone up in flames, leaving little more than a charred ruin behind.

Chairperson of Qatar Museums HE Sheikha Al Mayassa bint Hamad Al-Thani expressed her concern about the incident in tweet. In 2014 Qatar ran a cultural exchange programme with Brazil.

“A sad day for the museum community around the world. #Qatar and #Brazil shared an exciting year of culture in 2014, connecting between our cultures. Hoping the artefacts can be recovered.” Sheikha Al Mayassa tweeted.

The blaze destroyed most of the 20 million items in the 200 year-old former palace, including Egyptian mummies, dinosaur replicas and one of the oldest human skeletons found in the Americas, local media reported.

Troves of indigenous literature, art and documents related to colonial-era Brazil were also lost. A meteorite on display in the museum, however, was found intact. Ashes of the archive were seen floating in the air and covering sidewalks in the vicinity of the museum.

Qatar-Brazil Year of Culture built upon on a legacy of artistic exchange between the two nations, and celebrates their combined spirit. Although Qatar and Brazil may seem worlds apart, they have enjoyed close ties in recent years and have more similarities than meets the eye.

2014 was the year of Qatar-Brazil, with events taking place in both countries. In November 2014, the Brazil Festival took place at the MIA Park. The events included music and dance performances, outdoor movie screenings, and basket-weaving, graffiti, and samba workshops.

Charred ruins The majestic edifice -- which was closed to the public when the fire started -- was swept by flames as plumes of smoke shot into the night sky, while scores of firefighters battled to control the blaze.

Five hours later they had managed to smother much of the inferno that had torn through hundreds of rooms, but were still working to extinguish it completely, according to an AFP photographer at the scene.

By morning the extent of the loss was still unclear -- although a fire department spokesman told AFP there were no reports of victims so far.

Firefighters were poised to enter the charred ruins to see what might be salvageable, the spokesman added, warning that it would be dangerous.

"The facade is resistant, but a lot of material fell from the roof," he said. "We are going to proceed with great care, to see if we can save something."

The natural history and anthropology museum -- founded in 1818 and home to over 20 million valuable pieces -- has suffered from funding cuts, forcing it to close some of its spaces to the public.