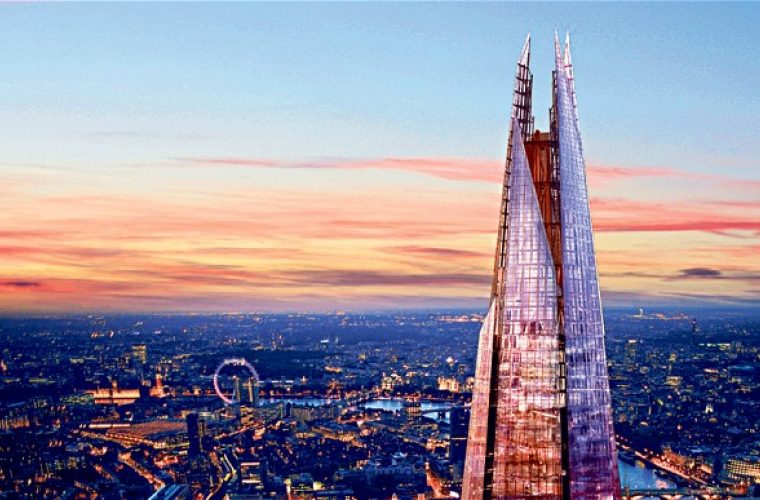 A marriage proposal, strange similes and a stunning panorama marked the public opening of the viewing deck for western Europe's tallest tower on a wet Friday in London. The Shard skyscraper was described as an "intergalactic spear" and a "cocktail stick" by charismatic Mayor Boris Johnson, who cut the ribbon for the first public visitors atop the 310-metre futuristic tower looming over London bridge. One visitor chose the moment to propose to his girlfriend of five years. "It sounds corny but she makes me feel like I'm on top of the world so I thought the highest place in London has got to be the best place to do it," a smiling James Episcopou, 22, told reporters. His fiancée, Laura Taylor, 22, said it had been a complete surprise. "I just feel overwhelmed, surprised and the view is fantastic. It doesn't matter that it's raining." The Shard is majority owned by Qatar and houses a premium hotel, several restaurants, 12 floors of apartments , 600,000 square feet of office space as well as the viewing deck. It is part of a £2bn redevelopment of the London Bridge area on the south bank of the River Thames, which cuts through the British capital. "All other buildings look like they've been put on the earth by people, but the Shard is like something that is prodding up," Johnson said. "Prodding up through the frail integuments of the planet, like an intergalactic spear. It's like the tip of a cocktail stick emerging through the skin of a super colossal pickled onion." The Shard which has been 13 years in the planning, struggled with financing after the 2008 credit crunch until the Qataris rescued the project, and the developers have been criticised for not being able to rent out the space. However, Irvine Sellar, the Shard's developer told Reuters 30 percent of the tower had already been leased and said he remained confident and optimistic. "It's a vertical town and it takes time to rent. It may take 18 months to let," he said. "All the retail is let, the hotel is let, the restaurants are leased, the viewing gallery is leased and some of the office space is leased." However, local residents and business owners have mixed feelings about the new tower, worrying that the influx of London's elite will transform the area. Terry Davies, who runs a German delicatessen in the nearby Borough Market, which traces its roots back to the 11th century, said the Shard threatens his business and the market as a whole. "The area's already changed a lot and it's possible the Shard will be good for the area but we might be seeing the end of the community market," he told Reuters. "It's all about balance. If the rents go up by 50 percent, as they're threatening to do, then we can't survive. That's when the chains like Pret A Manger move in and the whole area changes". K Patel, who owns a local newsagent, agreed. "It's a nice building don't get me wrong, but it would be better if it didn't put up the rent."