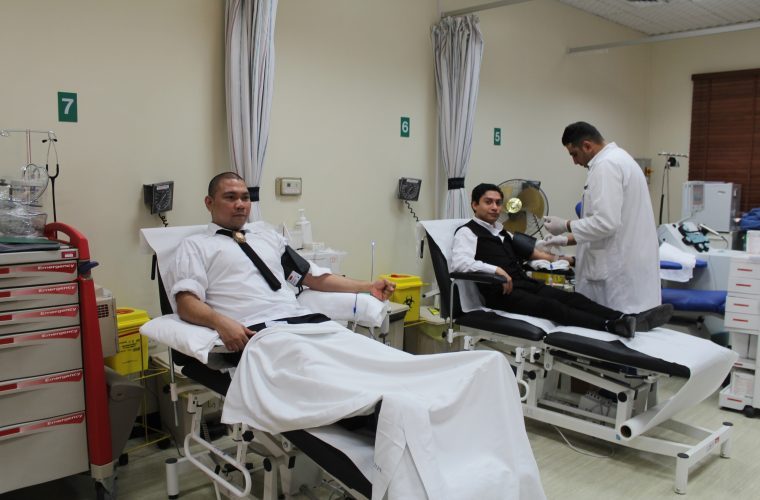 Doha, Qatar: 14 June, 2015 – In honour of World Blood Donor Day, held Sunday, June 14, 2015, employees of Shakespeare and Co., a popular restaurant and chocolatier in Doha, donated blood at Hamad Medical Corporation (HMC) in Doha as part of Shakespeare and Co.’s ongoing commitment to giving back to the local community.

As part of Hamad Medical’s blood drive, all blood collected from Shakespeare and Co.’s employees will go towards transfusions for patients with various ailments, including accident and burn victims, premature babies, as well as cancer and transplant candidates.

Mr. Sami Azrak, CEO of Shakespeare and Co., said: “Shakespeare and Co. is committed to giving back to the community and we wanted to tackle an issue that we face in our own community, which is the shortage of available blood. It is so important for the restaurants as a whole and also for our employees to find ways to pay it forward, especially as in this case, the blood from one donor can save up to three lives.”

Shakespeare and Co. are passionate about supporting social causes and in 2014 raised over 58,000 QR through three of their successful charity campaigns. These include Shakespeare and Co. pledging to support the Qatar Autism Centre by financially sponsoring three families who were unable to afford the tuition. In addition, in October 2014, Shakespeare and Co. donated 10% of the cost of each pink chocolate that was purchased from the restaurant’s Pink Wall throughout the month as they lent their support to Breast Cancer Awareness month.

To round out 2014, in November Shakespeare and Co. were privileged to be a part of Qatar Charity’s campaign, One Cup for Gaza, in their efforts to help rebuild Gaza. Shakespeare and Co. donated 10% of the total beverages from November 21-28 and raised over QAR 16,000. Meanwhile, Shakespeare and Co. renewed their commitment to support the Qatar Autism Centre in 2015 by once again financially supporting three families that are affected by autism and donated QAR 42,000 to the Centre.

Shakespeare and Co. have a deeply ingrained belief of giving back to the local community that they operate in. Along with participating in this year’s Blood Drive and once again sponsoring the Qatar Autism Centre, Shakespeare and Co. are in ongoing discussions with the Qatar Cancer Society to work together to continue to raise awareness for different types of cancers, including breast cancer.