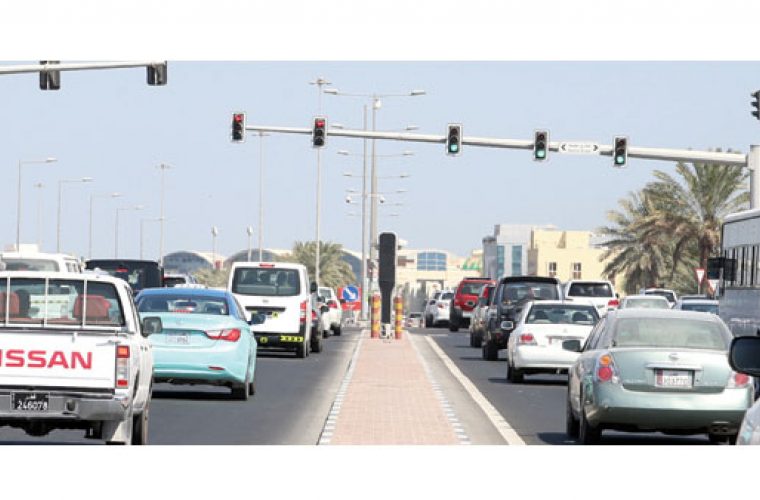 The duration of signals should be the same for traffic headed straight and those going left at intersections, several residents have suggested.
This, they feel, will ensure the smooth flow of vehicles in all directions and help prevent clogging and minor accidents.
The duration for which the green lights remain on varies for left-bound and straight lanes at a number of intersections in the city. Usually, it stays green longer - sometimes considerably - for the straight lanes than the left-bound lanes.
Residents say this leads to chaos and long queues at many intersections, especially those where the volume of vehicles turning left is high.
“As the signal duration for left-bound lanes is short, everyone wants to squeeze in, thereby causing a mess at the intersection. Sometimes, this also affects the movement of vehicles going straight,” said a long-time Doha resident.
Another commuter said the road design is a problem. “At many intersections, the portion of the road meant for turning left is narrower than the straight one. At most of these places, except the ones where new construction work has been carried out, the left portion has one or two lanes, fewer than the number of lanes in the straight direction. This leads to a longer queue of (left-bound) vehicles than for going straight,” he explained.
“Often, the flow of traffic in the straight direction is disrupted due to a spillover of left-bound vehicles onto the straight lanes. Due to this, many motorists can be seen honking and shouting at one another as they are unable to cross an intersection even if the signal continues to be green,” he continued.
Such situations also lead to practices such as overtaking from the right as motorists try to beat the queue while turning left. “When I wait in a long queue, I see many people drive past from the right and then try to squeeze in by turning left at the last moment. This not only holds up traffic in the straight direction but also adds to the queue behind. While these motorists somehow manage to cross a signal quickly, people like me have to wait for two or three turns to do so,” another motorist said.
Several commuters suggested that the signal duration could be optimised through the use of technology such as “smart cameras”, especially in the peak hours. Such equipment could help control and optimise traffic flow and prevent situations such as clogging in a particular section of the road, such as the left-bound lanes. The duration for which a signal remains open in a particular direction will depend on the volume of traffic, they point out.
Meanwhile, one commuter pointed to a dangerous practice seen at intersections. “Some cars could be seen turning left after the signal turns green despite standing in a lane meant for vehicles going straight. This is a highly risky move, which can take others by surprise and lead to accidents. However, motorists doing so do not seem bothered,” he said.