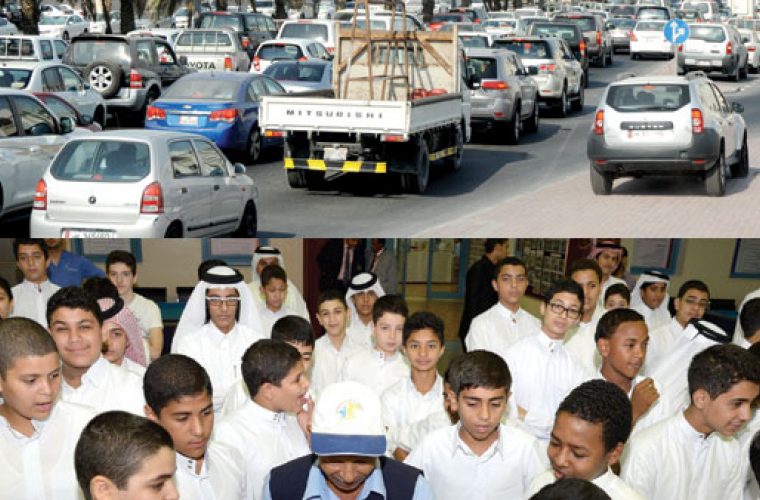 Traffic snarls worsened on Doha roads yesterday as feared with the reopening of schools after summer vacation. In all, more than 243,000 attended 385 schools yesterday.

While Independent schools and international schools began a new academic year, it was the start of the second term for many community schools.

Traffic was worse especially in the early morning when school bus drivers and parents competed with the usual white-collar office traffic to reach their destinations on time.

Al Mansura resident Pamela Lanto yesterday said that although her son Julian’s transport fetched him early yesterday morning, it still took him an hour to reach his school.

A Syrian parent said that it took him around 45 minutes to drop off his children from their home in Umm Salal to their school in Al Waab, and another 45 minutes to drive to his workplace in West Bay.

An Indian parent said he started from his house near the Qatar Decoration area on the Salwa Road at 6.15am in order to drop his son at his school in Duhail, about 22km away, before 7am.

“Before the summer break, we used to start at 6.30am, but anticipating clogged roads, we left early and that helped to reach the school before time,” he explained.

Later in the afternoon, when children got off from schools, most roads again became clogged.

The under-construction C-Ring near the Toyota signal continues to be one of the worst places for traffic jams at anytime of the day.

The Traffic police remained on hand to deal with the situation and provided relief through regular patrols.

It also alerted people early yesterday about an accident near the Umm Salal flyover towards Doha. “Be alert, patrols are there to monitor and control traffic flow,” the ministry tweeted.

Meanwhile, the ministry has greeted the students on their first day at school. In a tweet, it said: “Wishes for students for new school year. Remind all importance of safety precautions at schools. Wish them all a successful academic year.”

There has been a 25% increase in the number of students this year compared to the previous academic year.

The traffic situation is expected to worsen further in the coming days as Qatar University, which has more than 12,000 students on its rolls, is expected to open next week.