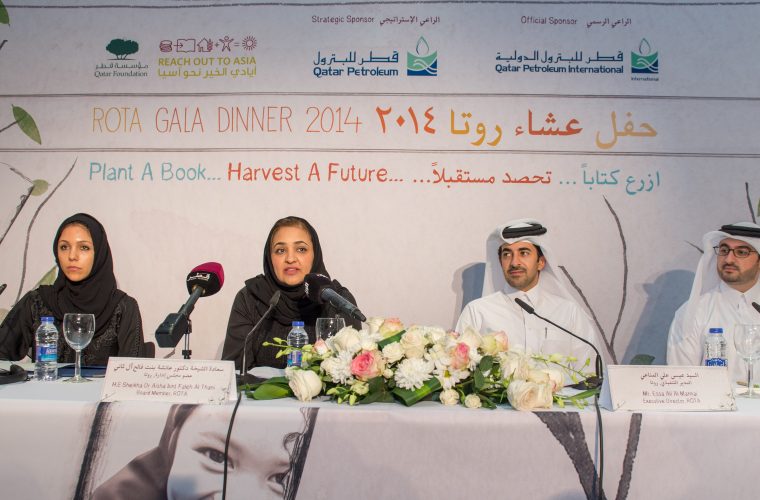 Reach Out to Asia (ROTA), a member of Qatar Foundation for Education, Science and Community Development, today (Wednesday) unveiled details of its highly anticipated 5th Gala Dinner and charity event.

Under the patronage of His Highness The Amir, Sheikh Tamim bin Hamad Al-Thani, the event supports Qatar Foundation’s mission to provide world-class education and foster a progressive society by addressing immediate social needs.

Proceeds from the event, which takes place at the Abdullah Bin Ali Castle in Doha on 15 November, will go towards education projects helping thousands of people and hundreds of communities across Asia and the Middle East.

The event will include a charity auction by world-famous auction house Sotheby’s.

The 5th ROTA Gala Dinner will support young people in Nepal and the West Bank, schools in Tunisia and Syrian refugees in Lebanon. For the first time in the Gala’s history, bidders will have the opportunity to support specific flagship ROTA projects directly in the auction. ROTA’s previous Gala Dinner raised USD 13 million.

Auction items include a black spinel necklace worn by Angelina Jolie; a Njoud Al Shaqab Arabian Horse and custom Hermès saddle; a Mini Paceman decorated and signed by Damien Hirst; luxurious getaways at Singita and the One & Only Resort in South Africa; and a rare MV Agusta F3 800 Ago Motorbike.

“No single evening has a greater impact on education access and development in the Middle East and Asia than ROTA’s bi-annual Gala Dinner,” said Her Excellency Dr Sheikha Aisha bint Faleh bin Nasser Al-Thani, a ROTA Board Member.

“The Gala continues to be a high profile, high impact opportunity for our generous sponsors and supporters to renew the promise we have made to our neighbours in Middle Eastern and Asian communities to invest in human potential and break down barriers to a decent education in the face of crises and political turmoil.”

QPI CEO Nasser Al-Jaidah added: “We are pleased to be sponsoring the Reach Out To Asia Gala Dinner in support of its global education projects, which serve thousands of underprivileged children.”

“As part of QPI’s corporate social responsibility, we are committed to improving international communities. In understanding that education is the root of economic growth and diversification, QPI and ROTA share the common ambition to build a brighter future by expanding knowledge, developing leaders, and driving progress in many countries around the world.”

ROTA is a Qatar-based non-profit organisation that empowers local communities by providing access to quality primary and secondary education to children affected by crisis across Asia. ROTA was launched in December 2005 under the patronage of Amir of the State of Qatar, His Highness Sheikh Tamim bin Hamad Al Thani, and chaired by Her Excellency Sheikha Al Mayassa bint Hamad bin Khalifa Al Thani.