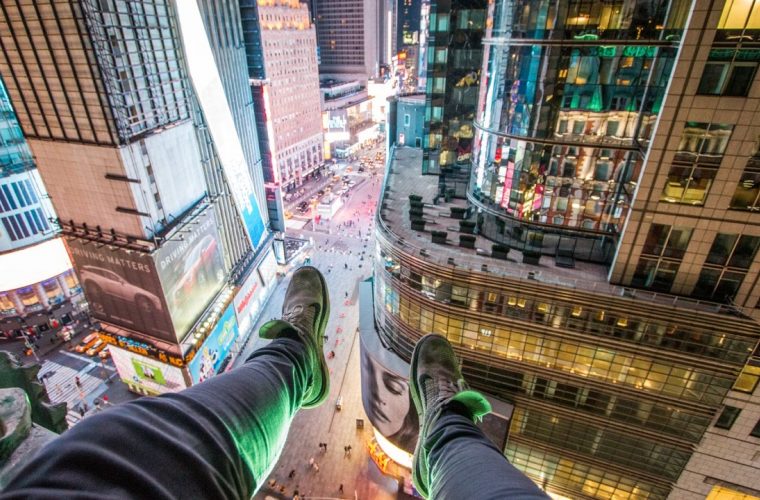 Rooftopping, an out-of-the-box craze which sees 20-something millenials dangling off skyscrapers and other tall buildings, has been around since 2010. Starting off as a plain initiative to shoot magnificent skyscrapers from another perspective, the trend has transformed into something way more innovative -- and oftentimes risky -- with the emergence of Instagram and, eventually, social media fame.

The saying 'There's no elevator to success' rings all the more true as an increasing number of Instagrammers opt to risk their lives to 'go viral' and earn a living from it. Just search the 'Rooftopping' hashtag on the photo-sharing app, and you'll notice that the majority of the most-liked entries feature people who aren't wearing any harnesses -- meaning one wrong move could plunge the posers to their deaths.

Just recently, a group of teens from a small town in the UK were prosecuted under the public order offence of threatening behaviour after scaling man-made buildings.

In Dubai, a Russian model was hauled in for a police warning after dangling off the 1,000 ft-tall Cayan Tower, more popularly known as the Infinity Tower. Promoting outcry from critics who slammed the behaviour as "a very bad example for youth".

But the ultimate turning point which has forced police to get involved and address this dangerous trend happening in cities worldwide was when daredevil Wu Yongning -- who also claims to be the first Chinese rooftopper -- crashed to his death in November 2017 while recording a stunt atop the 62-storey Huayuan International Centre in Central China.

And the horrific moment was caught on camera.

"He's an idiot, but it's sad," were the exact words @nukeproofsuit (NPS) of Instagram had to say when he shared a link of an article chronicling Wu's passing. He later adds that Wu pushed the feat to its limit: "Pull-ups are for the gym".

NPS, who has almost 22,000 followers on Instagram, has been taking his photography skills to the next level with shots featuring tall buildings, beautiful architecture, and symmetrical lines of undone man-made structures -- most of them taken right here in Qatar.

With the 2022 FIFA World Cup on its way, NPS is taking advantage of Doha's raw beauty through its many art forms. Be it the Museum of Islamic Art, West Bay's Palm Tower, the Musfur Sinkhole, and his perfectly-smooth shot of Souq Waqif which was met with rave reviews. Some of his most-liked entries on Instagram are a product of urban exploration or "urbex," a descendant of rooftopping.

Unlike rooftopping, 'urbex' is more toned-down and is designed for photographers in search of seamless symmetry. Described as the exploration of man-made structures -- usually abandoned ruins or not-usually-seen components of the man-made environment.

NPS is fascinated by geometry and perpendicular views and because of this, an integral part of his process is finding the perfect location to take his photograph to ensure lines are straight, symmetrical and parallel with the edges of the frame. This is a challenging and lenghty process that compels him to explore parts of the city that he may not normally visit.

Contrary to his fellow rooftoppers, NPS doesn't seek out popularity. He says that he wants to keep his private life and Instagram moniker separate as much as possible.

So is rooftopping legal in Qatar? There's no specific law against it, but if you're not as brave as NPS, then it's best to just settle for those selfies -- at least for now.

What are your thoughts on rooftopping? Do you think this trend will continue to grow despite the risks associated? Do you practice rooftopping in Qatar or know someone who does. Drop us a line and let us know in the comments below, and don’t forget to like and share this article!