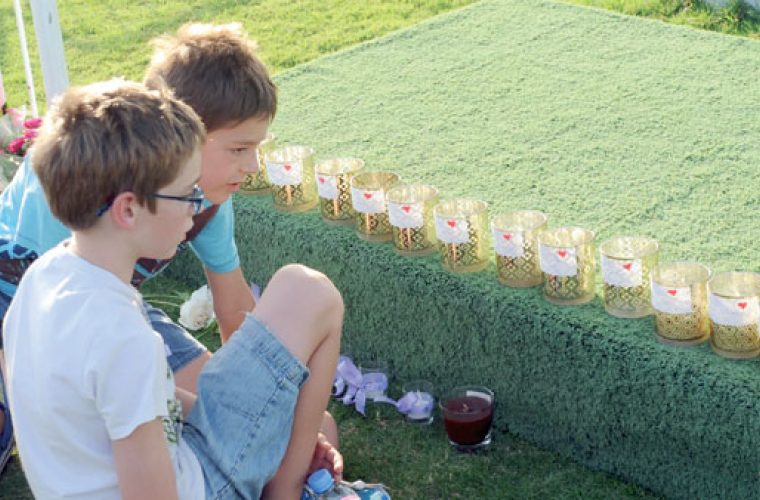 : A number of friends and well-wishers of the Villaggio Mall fire victims gathered at the Aspire Park yesterday to express solidarity and a desire to seek justice, although none of the parents of the children who died in the tragedy turned up at the event. But they issued a statement to newspapers by email, expressing their grief on the occasion of the first anniversary of the devastating incident. Flowers were laid and candles lit at the foot of a giant screen where a message of solidarity was displayed for the families who lost their loved ones in the fire which killed 19 people, including 13 children. Everyone who gathered paid respects to the victims, observing a minute of silence and offered prayers. A purple ribbon was worn by the mourners symbolising children, bravery and solidarity. The names of the victims were written on 19 candles and balloons were released to mark the dead. “It has been 12 long months since the death of our beautiful children… As families, we are now spread around the world and we understand that as time passes, memories fade. Today, we ask you to pause and remember,” said a statement from the families of the children who died at Villaggio Mall fire on May 28, 2012. “We, as a group of grieving parents, are committed to ensuring that our children’s memories continue forever. We are committed to fighting for justice. And we are committed to making Qatar a safer place.” Many of those who came to the event were families with small children, who felt for the victims, a majority of whom were children, and some of them had been their playmates. A friend of the Weekes family who lost their triplets in the fire said: “My children and the triplets were in the same play group. Obviously, we were in complete shock on that day. Our prayers are always with the children and their families. “We hope justice will be there at the end,” she added. Another well-wisher of a family which lost their child said: “We still wonder what and how it happened. It’s nice to see many people here to show their solidarity. And, of course, we hope that we will find justice some time next month.” Source : Qatar Chronicle