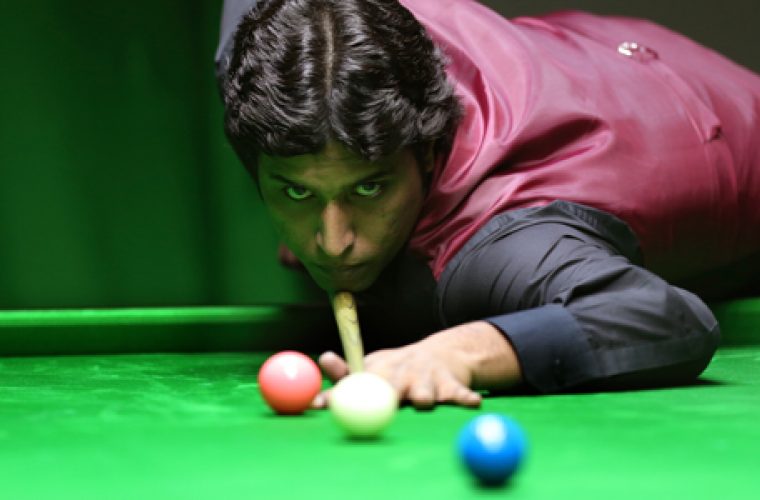 Muhammad Asif of Pakistan, reigning world champion stood his ground during decisive moments of his final match against Amir Sarkhosh of Iran to win the Second Asian 6-Red Snooker Championship here yesterday. The 31-year-old from Faisalabad, winner of the World Amateur Snooker Championship in Sofia, Bulgaria, thus added another feather in his cap by winning the Asian 6-Red title. He won the 2012 IBSF World Snooker Championship, also known as the World Amateur Snooker Championship, a premier non-professional snooker tournament, by defeating Gary Wilson. The 6-Red format is a shortened version of the game which features only six red balls on the table as opposed to the conventional 15. Yesterday in Doha, Asif having defeated India’s promising player Laxman Singh Rawat in the semi-final continued in the same vein in the title clash. The six-foot cueist took a commanding 3-0 lead in the race to 13 final. He cleared the table in the first two frames with his opponent not troubling the scorers. But, Sarkhosh did not throw in the towel. The Iranian bounced back to win the fourth and fifth to keep his hopes alive. Although, Asif pocketed the next two, to take a runaway 5-2 lead, Sarkhosh managed to claw his way back at the end of the ninth frame, with the scoreboard reading 5-4 in favour of Asif. But a few tips from compatriot Muhammad Sajjad, who lost to Asif in the quarter-finals in Doha, seemed to have worked wonders. A change in approach saw Asif winning the next two frames to deserving clinch the title. “I was a bit disappointed as I failed to win the Asian Snooker Championship in Pakistan. Luck was not on my side, although, I was playing well then. Now, after winning the title I am happy. My morale is high now. I am confident if I play the same way, then, I will win more titles,” said Asif. Saleh Muhammad of Afghanistan won the Asian title which ended on May 3 in Pakistan. Asif who is sponsored by National Bank of Pakistan said his opponent tried to slow down the pace of the match after he took a 3-0 lead. “It is difficult to maintain the same level of momentum throughout the match. Yes, in the first three frames I had good scores. But, he is a mature player and has been playing well for the last one year. So he tried to slow down the proceedings with his tricky shots.” Asif admitted that ‘technical guidance’ from Sajjad after the ninth frame helped him immensely. “It was a difficult and a tricky situation, with score reading 5-4 in my favour. A change in approach and tactics was needed. Yes, Sajjad’s advise came handy. You need to mentally relax in such tight situations. Walking out of the playing hall helped me to relax and analyse the situation. Thereafter, I had the situation under control,” disclosed Asif, knick named The Undertaker by his friends. “They call me The Undertaker for my aggressive style of play,” he disclosed. The Undertaker is the ring name for Mark William Calaway, an American professional wrestler. Earlier, in the semi-finals Asif defeated Rawat 6-2. In the other semi-final, Sarkhosh edged past Mohammad Al Joakar of UAE. Cueists from Pakistan, India, Afghanistan, China, Hong Kong, Iran, Iraq, Mongolia, Singapore, Hong Kong, Thailand, UAE, Saudi Arabia, Kuwait, Palestine, Jordan, besides hosts Qatar took part in the championship. This is the first time the individual 6-Red Championship was held in Qatar. Source : Qatar Chronicle