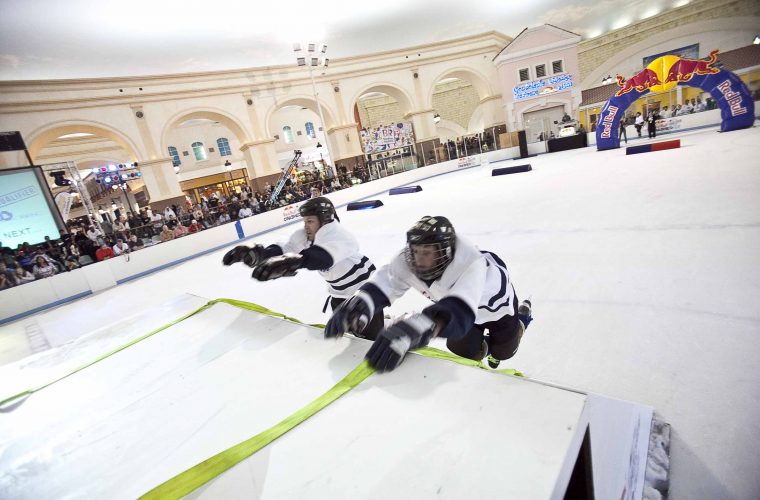 Doha, February 6, 2011 This Friday, under the auspices of the Qatar Ice Hockey League and in partnership with Vodafone, MINI and popular online community iLoveQatar.net, Red Bull will host the 2011 Red Bull Crashed Ice qualifier in Doha. The event now has 32 confirmed local participants, and is scheduled to take place at 6pm at City Center Ice Ring. Contestants will face-off against each other in head-to-head battles round a specially designed assault course of bumps, jumps and slaloms whilst reaching speeds of up to 50km/hour. Synthetic ice from Europe is being shipped in to construct the course. In addition MINI, the global sponsor of the championship, will provide the centerpiece obstacle. Qatar’s reigning champion, Bill Chase, who went on to compete in the world championship final in Canada last year, said he would be returning to defend his title, and was expecting to see some stiff competition in the qualifier. ‘I gained a lot of experience in the championship finals last year,’ said Chase. ‘This may give me an edge on Friday, but there are some really strong up-and-coming young talents in the Qatar Ice Hockey League and ultimately this kind of competition is anyone’s game.’ An added bonus at Red Bull Crashed Ice this year is the introduction of the MINI Rookie Award. This prize goes to the best new comer to Red Bull Crashed Ice and is being awarded for the first time in the history of the sport. Red Bull Crashed Ice is an exciting hybrid sport, combining elements from ice hockey and boarder cross, and is becoming increasingly popular across the world. Red Bull Crashed Ice made its debut in January 2000 in Stockholm, and has since been held in many countries around the world. This Friday’s winner of Red Bull Crashed Ice in Qatar will have the chance to compete with 63 other participants from around the globe in Quebec City, Canada, where the World Finals will take place on March 19, 2011. The event is on the 11th of February from 6pm more information here http://www.iloveqatar.net/forum/read.php?27,26490 ILQ News