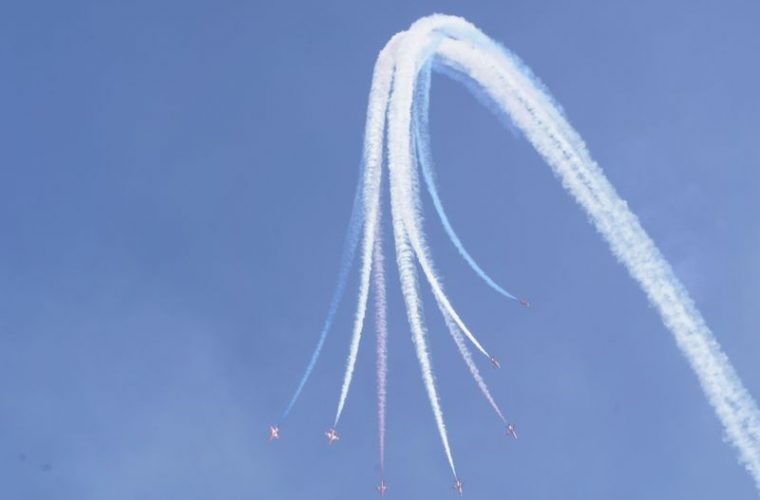 The Royal Air Force Red Arrows showcased an amazing display of flying prowess in the skies of Doha yesterday. The first half of the aerobatic show included some basic aircraft loops, bends and rolls performed by nine British pilots flying their dual-control BAE Systems Hawk jets with a maximum altitude of 48,000ft. During the second half, spectators were enthralled by the Split, Cyclone and Gypo break formations - considered as some of the most difficult and risky air displays of the Royal Air Force Aerobatic Team. The nine Hawk jets were joined by the Eurofighter Typhoon, an advanced multi-role combat aircraft, during the latter part of the show. Its solo performance was one of the highlights of the event. Briefing the media later, ground superviser Mike Ling said the shortest distance between the aircraft during the formations was about 5-6ft. The team comprises experienced combat pilots who have flown a number of fighter jets like Tornado and Typhoon before joining the Red Arrows. “We do three flights a day, five days a week in four months before the winter starts,” said Ling, who also vouched for the reliability of the Hawk jet. The entire team, he added, comes up with new displays and formations every year, including some unique shapes that may represent various things. Some of their popular formations and displays include the Apollo and Eagle Roll, Oblique Loop, Full Carousel, Python, 5/4 Split, 5/4 Cross, Lancaster Bend and the Vertical Break. While the show was dynamic and entertaining, Ling stressed that it starts with safety and “safety is their number one priority”. Besides demonstrating speed, agility and speed of the Royal Air Force, one of its main roles is to assist in recruiting members for their military, help in defence diplomacy and showcase British industry. The performance this year aims to strengthen the ties between the UK and all countries in the Middle East, especially Qatar. “We have lots of military training and education that goes on between our two nations,” he said, recounting that he was joined by a Qatari officer on his flight about 20 years ago during his training. “My course did have 15 Qatari officers and it is important to maintain those ties. That is why we have come to display here in Qatar,” added Ling. The Royal Air Force Red Arrows will perform at the Dubai Airshow later this month. The Middle East Tour 2013 includes stops such as Bahrain, Oman, the UAE, Jordan and Kuwait. BAE Systems senior military adviser Glenn Torpy said they have built at least 1,000 Hawks and 370 Typhoons - 570 on order with six different air forces, including some in the Middle East. He described the Typhoon as “the only aircraft that can fight effectively above 50,000ft” due to its airframe and engine combination. Asked why they fly nine jets, Ling noted that the number can form a perfect diamond shape, known as the trademark of the team. They started with seven planes in 1967. The Royal Air Force Red Arrows team has visited 54 countries and flown in over 4,500 public displays. It comprises about 120 members, including engineers, administrators, drivers and support staff. It will be celebrating its 50th display season next year. http://www.gulf-times.com/qatar/178/details/370994/red-arrows-rule-doha-skies Photo: iLoveQatar.net