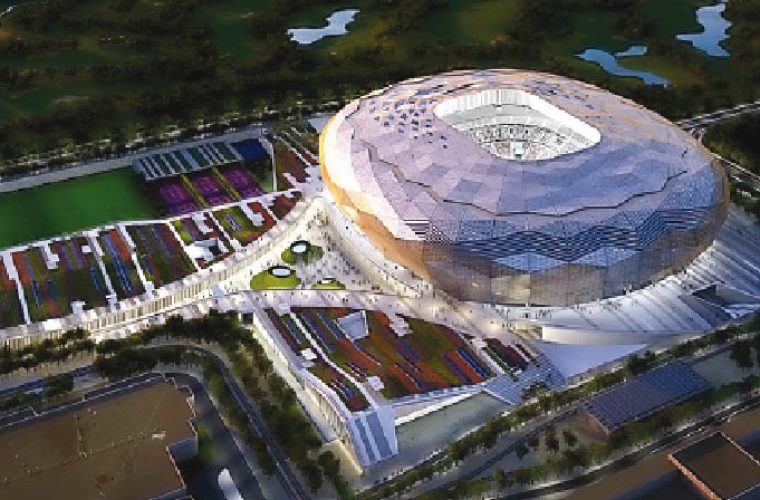 Rare rock samples dating back to tens of millions of years have been unearthed during construction of the Qatar Foundation (QF) stadium in Doha.

Excavation of 1.37 million cubic metres of rock or the equivalent of about 550 full-size Olympic swimming pools of solid rock, at the site unearthed geotechnical samples of ‘Dukhan rock’ dating back about 20-30 million years. The stadium is designed to represent a diamond sparkling in the desert.

“As we dug down deeper, we came across interesting and distinct colour bandings on the rock formations. It was an interesting find, and we were intrigued to find out how old these rocks were,” said Eid Al Qahtani, Project Manager, Competition Venues, Supreme Committee for Delivery & Legacy. “We decided to conduct further research into the ‘Dukhan rock’, identified by a site investigation and geotechnical study.”

The rocks originated under water, forming a layer known as the middle-Eocene epoch. “This is an extraordinary find for a stadium construction site, as usually this type of rock is found in deeper tunnelling works, conducted by the likes of Qatar Rail,” said Al Qahtani.

Excavation at the stadium was completed by 32 excavators, which reached 17 metres deep, allowing for the pitch to be built at around five-six metres underground. The decision is based on global cooling research conducted by Spanish stadium designers Fenwick Iribarren Architects, supported by the findings of British engineering firm ARUP, which discovered that by immersing the stadium several meters into the ground, the effect of the wind is minimised and natural cooling is maximised through the ‘bowl cooling effect’.

“The cooling plant for the stadium will also be underground to lessen the effect on the surrounding community, hidden at around 16-and-a-half metres below the surface,” said Al Qahtani. “Part of the rocks was also utilised by the nearby golf course under construction, while the remainder was sent to be reused on projects.” After passing the 1.5 million man hours mark without any lost time accidents, the site is ready for the vertical construction of the 40,000-seat stadium. Post-tournament, it will be reduced to 25,000 seats and will become the centrepiece of a university league under way.

The stadium and surrounding sports facilities, including an indoor arena, tennis courts and an indoor swimming pool, will be used by the student community at Education City after completion in 2019, allowing sport to be played all year round in comfortable conditions.

The stadium precinct includes an aquatic pavilion with world-class facilities such as an Olympic-size swimming pool, training and diving pools, a multi-purpose pavilion for indoor sports and concerts, male and female spas, open air football training sites, indoor and outdoor tennis courts, and basketball facilities. The surrounding area also includes a Metro station within walking distance to the facility.

“We are working with partners at QF to ensure the stadium becomes a national heirloom. It will also contribute to providing an advanced stadium experience for fans, players and visitors during the 2022 FIFA World Cup Qatar,” said Ghanim Al Kuwari, Executive Director, Competition Venues, SC. (Source)