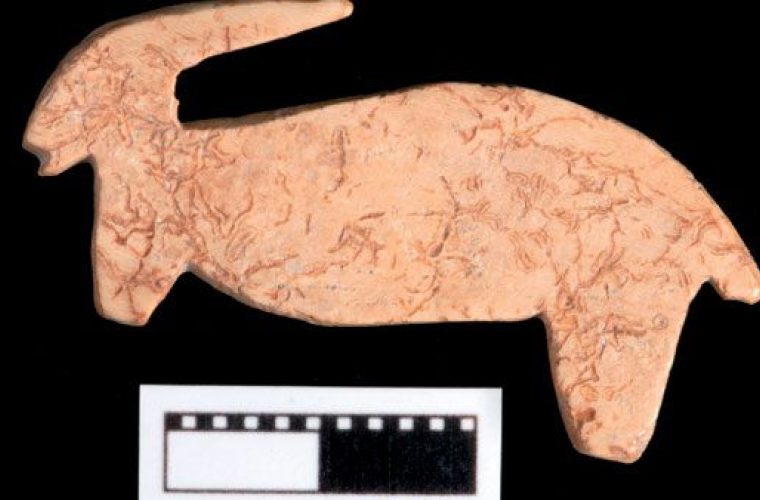 The Oryx, a beautiful black and white antelope, with its long curved horns, has long been regarded as the nation’s unofficial national symbol. “Orry the Oryx” was the logo for the 2006 Asian Games in Doha, and his giant statue on the Corniche continues to delight youngsters. From an oryx silhouette on the tails of the national airline fleet to the overstuffed animals perched atop the Post Office roundabout, the oryx appears almost everywhere in Qatar. But there never has been a written or oral account of the oryx ever having set hoof on the peninsula of Qatar in days gone by. The bones of many other mammals have shown up in the midden heaps on archaeological sites. But no evidence of the oryx has been found, although it’s assumed that, as the supreme Arabian desert survivor, it must surely have wandered the plains of Qatar. Until now. Just two weeks ago archaeologist Ifan Edwards, one of a team from the University of Wales carrying out excavations at the old coastal site of Al Ruwaida in north-west Qatar, spotted something unusual in his sieve during work on the large fortress which dominates the settlement. Beneath a dense layer of rubble a deposit rich in organic and ceramic remains had been uncovered. Archaeologists routinely dry-sieve such material to make sure no object, however small, is overlooked. Ifan had noticed a tiny bone silhouette of an oryx, only 5cm in length, but instantly recognisable from its profiled head and horns. “I was amazed at its beauty,” he said, “and the fact it had survived.” The little carving is thought to be about 300 years old. Faisal al-Naimi, head of the Department of Antiquities at the Qatar Museums Authority, said: “The image of the oryx is very interesting because it looks, in its simplicity and lack of small details, like a piece of modern art, but it’s actually three centuries old or more. The oryx is greatly admired in Arabia for its elegance and beauty, so much so that its Arabic name, Maha, is a name sometimes given to girls.” Dr Andrew Petersen, director of the Welsh team which is working under the sponsorship of the Qatar Museums Authority, commented: “This is a unique find, and especially so because the oryx is the national emblem of Qatar. It’s a rare example of the kind of craftsmanship at the time.” Archaeo-zoologist Dr Hannah Russ, working with the project at Al Ruwaida, said: “The plaque was carved from the bone of a large mammal, which because of its flat surface was most probably a scapula or shoulder bone. We hope that with advanced chemical analysis we’ll be able to identify what species of animal the bone came from.” One side of the little plaque appears to be polished, while the other side is rougher and includes a vertical groove, which may have been used to attach the plaque to a wooden panel as an inlay. It has already been subjected to a high resolution 3D laser scan by Ben Jurgensen of Virginia Commonwealth University. In addition to the miniature oryx, several other objects of interest have been recovered from the same rich organic layer, including a small triangular bone plaque and a number of bronze tacks with traces of fabric still adhering to them. The site at Al Ruwaida, profiled in Gulf Times on May 6, consists of a large fortress and settlement, including two mosques, a boatyard and merchants’ warehouses. After several centuries of occupation it was abandoned in the 1760s when the inhabitants appear to have moved to Al Zubara. Source : Qatar Chronicle