Raqami TV - the first channel to break a million subs on YouTube! 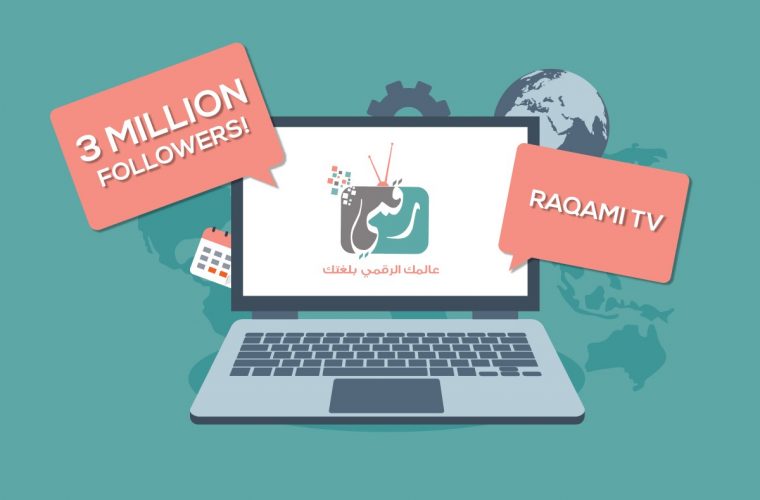 Since it first appeared in 2005, YouTube has turned into an Internet phenomenon, becoming the number one platform in the world for online video creation and sharing, and the second largest search engine after Google. For the past 13 years, this vast platform has shown the way for those whose main desire is to inform, entertain and educate people at a global level. And the rapid rise of Raqami TV bears witness to the way in which innovative, creative providers can use YouTube to successfully reach a global audience.

Raqami TV is the largest private Media Publisher from the GCC on YouTube and the fastest growing Arabic tech channel on the platform (with the exception of Al Jazeera.) Since its inception around 2.5 years ago, Raqami TV has achieved an incredible 40% month-on-month growth in its number of subscribers and views and has built a huge fan base over its associated social media accounts.

Khalifa Saleh Al Haroon, the co-founder of Raqami TV explains how the channel began its journey, the secret of gaining a million subscribers, and much more.

“I used to be a YouTuber and loved to do random stuff on my own channel. I was focusing mainly on tech related content, such as the latest Apple products. I was also creating YouTube video content for Vodafone, which helped the channel to reach 12 million views, making it rank an amazing third in YouTube world ratings."

He goes on to add: “The initial idea for Raqami TV came from my partner, who prefers to stay out of the spotlight. He wanted to have a YouTube channel focusing on Arabic content. He heard that I like tech and was growing my media network, so one day he approached me and asked if we could build a channel together. And that was the beginning of our incredible journey! We have never looked back and we have just kept on flourishing.”

Over a million subscribers

Raqami TV has racked up more than a million subscribers in a relatively short period of time through the creation of an incredibly strong relationship with their loyal fan base. As Khalifa adds:

“We became the first channel in Qatar (excluding Al Jazeera) to break a million subs on YouTube and our total count on social is almost 3 million. We are now one of the biggest tech channels in the world.”

“Although we are based in Qatar but the team is spread in many areas around the world including Palestine and Egypt, giving us a diverse range of views across our platform.”

The secret of their success

The road to a million YouTube subscribers is not easy, but Khalifa is generous enough to share several effective tips to allow fellow YouTubers to flourish. As he states:

“There is not one single secret, just three simple things to bear in mind and focus upon. First – people like my style, which is light hearted. I use that style to build a close personal relationship with my audience. Secondly, I am always honest. I always tell the truth, I let viewers know what the pros and cons of a device is. People love to hear the truth, especially when it comes to purchasing decisions. Finally, I make sure that in every single video I always thank my viewers for their time. In this fast-paced world, with competitors constantly vying for their attention, their time is precious, so I always appreciate their support. We constantly aim to post great, interesting and enjoyable content in a timely manner, but at the end of the day our viewers are crucial. We cannot grow without their views and their support – and I truly believe that!”

Tips for the future

Khalifa leaves some tips to young YouTubers who wants to follow in his footsteps – as he says:

“Whenever I talk to young people who want to get engaged in YouTube stuff, I always remind them not to focus on one country, you can focus on a specific topic or genre and make that subject your own. And have patience – nothing happens overnight! Real success takes time, a great deal of effort and a lot of hard work! Practice makes perfect, so now I just pick up my phone, go to my studio, where everything is set up just how I like it so that can simply create without stress, and push the video faster. All this is because I have already done the ground work over many years, and prepared everything beforehand. This solid foundation now means that I can achieve speed, consistency and top quality content - fast!”

Khalifa loves his work and wants to take Raqami TV to another level. As he concludes:

“My ultimate ambition is to make Raqami TV the biggest tech channel in the world. At the end of the day, I am enjoying what I am doing, and I think that enjoyment will be key to our future success”

As they continue to create unique content, engage their audiences and gain their loyalty, there is little doubt that the future looks incredibly bright for Khalifa and Raqami TV! So why not visit them right now, and make their YouTube become your true tube!