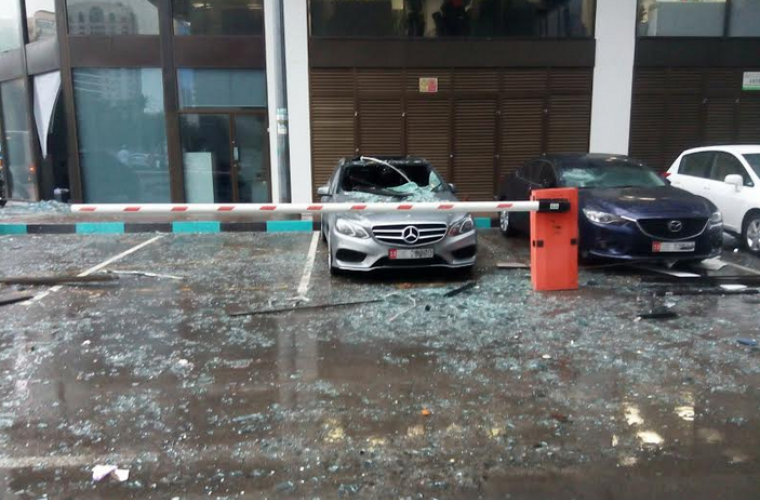 Rain and thunderstorms caused disruptions across the UAE on Wednesday morning as flights were cancelled and schools were closed in Abu Dhabi and early disbursal announced in several schools in Dubai.

4..14pm: Some parents report their school-going children in Dubai arrived more than two hours late from school due to traffic created by water-logged roads in certain areas of the city.

3.38pm: All public parks in Sharjah to remain closed on Wednesday due to the bad weather.

3.32pm: Rain, flooding and heavy winds could affect some of outdoor events in the UAE over the weekend.

Global Village will remain closed on Wednesday due to “current bad weather conditions”, it was announced.

However, organisers of Taste Of Dubai, a three-day outdoor food festival starting on Thursday evening, say the event will go “full steam ahead”.

2.54pm: An urgent stop of lifting operations using mobile cranes, working at heights and the movement of heavy vehicles and equipment has been announced in Abu Dhabi.

2.31pm: All schools in the UAE will close on Thursday, said Mohammed Darwish of the KHDA.

2.22pm: Parking in Sharjah will be free all day due to bad weather.

1.53pm: All private and public schools in the UAE will close on Thursday, according to Minister of Education Hussain Al Hammadi.

1.40pm: Abu Dhabi International Airport announces resumed flight operations. Passengers are advised to contact their respective airlines for an update on their flight schedule prior to heading to the airport.

12.57pm: Residents in Abu Dhabi were urged not to leave their homes or workplaces unless in an emergency.

Aweida Al Marar, chairman of municipal sector regulator in the emirate of Abu Dhabi, the Department of Municipal Affairs and Transport (DMA), told Gulf News that this is the best safety measure for the time.

12.50pm: Flights at Abu Dhabi International have been suspended due to the adverse weather conditions across the United Arab Emirates.

The suspension has forced flights to divert to Al Ain International, an airport on the Abu Dhabi and Oman border, and to Dubai International, according to the airports website.

12.34pm: Following heavy rain and thunder in Abu Dhabi, traffic officials called upon motorists to avoid driving except in emergencies.

12.25pm: Abu Dhabi Air Expo, which is being held at Al Bateen Airport, was disrupted due to heavy rain for the second day on Wednesday.

Organisers did not allow people to enter the main exhibiting area. A scheduled press conference at 11:30 am has been cancelled. Officials are yet to issue a statement whether the air expo is cancelled for the day or whether it will be extended.

12.21pm: Sharjah Police confirmed the road to Wadi Helo has been closed to traffic from two directions because of heavy rainfall and flash flooding.

12.04pm: Heavy rain marked by thunder and lightning resumed on Wednesday morning in Abu Dhabi after what seemed like mostly sunny skies after dawn.

11.18am: Many Dubai schools asked parents to pick their children up and close early due to the heavy rain and thunderstorms. See the full list of closed schools here.

10.37am: Residents in Jebel Ali reported waterlogged roads due to heavy rain, thunder and lightning from 9am.

8.58am: Rain clouds have reached Dubai, bringing heavy showers over Al Maktoum International Airport at around 8.30am on Wednesday. (Source)