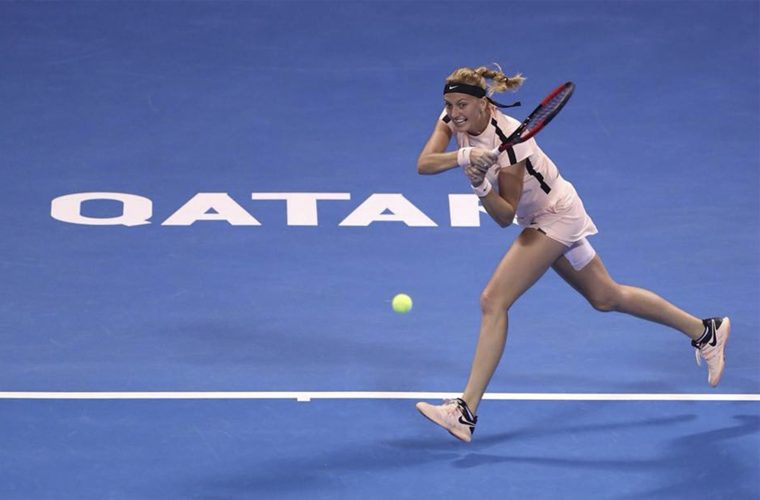 The Khalifa International Tennis & Squash Complex glittered on Sunday as the last remaining female tennis players in the 7-day Qatar Total Open tournament -- Petra Kvitova of the Czech Republic and Spain's Garbine Muguruza -- convened before an eager pack of tennis fans to battle it out for the Qatar Total Open 2018 (QTO 2018) title.

After two hours and 16 minutes of a closely-fought duel, 27-year-old Petra Kvitova -- who beat three of the top-five players including World No. 1 Caroline Wozniacki in the semi-finals -- turned out victorious in the end. The Czech's knife injuries from a 14-month-old home invasion attack didn't stop her from locking an eye on the Golden Falcon Trophy -- which she called "beautiful" upon grabbing hold of it. Petra's 13th consecutive winning streak brings her back to the tennis hall-of-famers, jumping 11 ranks from No. 21 to No. 10 upon clinching the QTO top glory.

Having lived up to expectations from tennis fans, Kvitova put up a fine display of high serves, forehand and backhand volleys, measured top-spin slices, and drop-shots to prevail over Muguruza with a winning score of 3-6 6-3 6-4.

Compared to her fellow competitors, Kvitova is an underdog for the trophy. She began the finals having lost the first five games. Down 5-0, she then worked up her serves and found some rhythm to hold the next three serve games. By then, her opponent Muguruza was already through with the set at 6-3 in 35 minutes.

Left-handed Petra's Doha victory took place after her very recent wins at the St. Petersburg Ladies Trophy, and two Fed Cup titles against Switzerland. Her battling run to the QTO 2018 championship will go down as one of Kvitova's most physically testing title runs. It was Petra's maiden QTO title.

Coming into the final, Kvitova had spent 8 hours and 22 minutes on court, meaning the road to finally clenching the Falcon Trophy wasn't a walk in the park. Speaking to journalists, the QTO 2018 title-holder said: "It feels great. It took a while to win it, for sure definitely.”

Petra also thanked her team, including her coaches, family, and friends: "I'm very grateful to them. I hope the fans enjoyed my performance." She'll be taking home $591,750 USD in prize money.

Her Spaniard rival, Garbine Muguruza, -- who needed to tweak her knee and call for medication amid the game -- gracefully acknowledged Kvitova's climb saying: "I'm happy. Petra is such a good opponent." Both Petra and Garbine stand 6-feet tall.

An avid fan of Petra under the name of Angie Johnson commented on Women's Tennis Federation Facebook page saying: "Coming back from 0-5 and then a set down to win, that’s what champions do! Well done, Petra! Best final of the year for me!"

HH the Emir Sheikh Tamim bin Hamad Al-Thani and President of the Qatar Tennis Federation (QTF) and Chairman and CEO of the Paris Saint-Germain Football Club, Nasser al-Khelaifi were personally there to witness the historic finals of the well-attended tennis match.

A total of 64 players slugged it out for seven long days and nights in the state-of-the-art Khalifa International Tennis and Squash Complex for the most-coveted top honour.

Did you have the chance to watch the finals of the 7-day 2018 Qatar Total Open tennis tournament yesterday? If so, what are your thoughts on the results? Drop us a line in the comments below and also, don't forget to like and share this article!