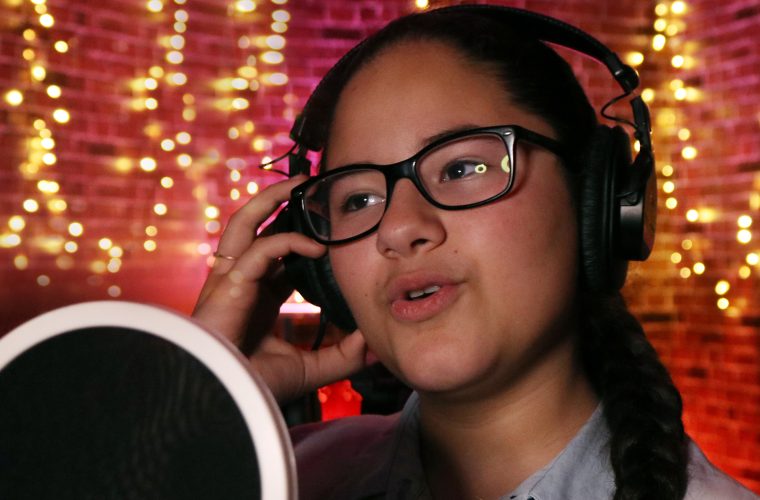 Think back long and hard to what you were doing when you were 12-years-old. You were probably going to school, planning your next weekend outing with friends, taking part in an extracurricular activity, and thinking about what’s for dinner.

If you’re Janna Thomson, you’re doing that and winning singing competitions to boot. Gifted with a golden voice, Janna has been singing since she was a child and, at the tender age of 12 has already won gold in the 11 and under vocal category at the 2017 Qatar National Music Competition. She’s auditioned for The Voice Kids Arabia, was selected to sing with Dana Alfardan, and may have a shot in February on Britain’s Got Talent.

ILQ sat down with the young singing prodigy to hear her inspiring story!

ILQ: At what age did you know that singing was something you were good at and when did you make the move into singing professionally?

JT: When I was about 4-years-old I started singing. My Dad would sing around the house and he would sing to me – so I picked it up from him. Eventually he saw something there and was like ‘We need to develop your hobby into something more, because you have a really big talent’

In those early days I was a huge Justin Bieber fan, so I sang mostly his songs to start – I would just sit in my room and sing all day! I didn’t move into things professionally until I was about 9- or 10-years-old after I started seeing how people responded to my singing. So I was like ‘I have to take this seriously, because it’s something that I love to do and could make a career out of.’

My music idols are Adele, Demi Lovato – (I love her!), Charlie Puth, and Shawn Mendes – they’re the most amazing singers to me – they’re so confident and talented!

ILQ: Qatar has fantastic resources for supporting the arts here in Doha! Did you take any training classes and vocal courses to help you along your way?

JT: The first type of lessons I got into were piano lessons, where I learned how to play and then eventually sing along with the piano. Then a year later I got a vocal coach, and now I’m looking into enrolling in the Qatar Music Academy and trying to get involved with them which I hope will probably happen soon!

ILQ: You recently competed and one gold in your vocal category at the 2017 Qatar National Music Competition. Tell us about what that was like!

JT: This was the first official competition I ever participated in! I was enrolled in the 11 and under category and I received a gold medal and also the Briton Award for best British performer. It’s amazing how Qatar gives all these opportunities for young artists to be showcased and included!

ILQ: You also made it to auditions this year for The Voice Kids Arabia in Beirut, Lebanon and sang in front of the judges and studio audience. Walk us through that experience!

JT: It all started when I sent them some of my singing videos. I had to send them several styles of songs so they could gauge which was the best for my voice. I then had a couple of phone interviews with the producers and then a month or two later I found out I was accepted into auditions on my Mom’s birthday!

My Dad was away at that time, so my Mom took the phone call from the producers saying I was accepted. She came up to me with the phone in her hand with this surprised look on her face…so I knew something was happening. I just started crying and when she got off the phone she said to me ‘I’m so happy for you, I’m so proud!’

It was amazing. Out of 24,000 applicants only 100 kids got accepted for auditions and I was one of them. It might not seem that big but when I think about it it was crazy….I was so happy and excited, but also nervous – I was freaking out!

ILQ: So you packed up and flew to Beirut. What happened when you got to Lebanon?

JT: When I got to Lebanon we immediately crashed at the hotel for a while as we had a 3:00 a.m. flight. Afterwards I got up, got ready, and headed downstairs to get to know some of the other kids who were auditioning and hung out with them for a while – it was amazing!

Then we headed over to the studio to meet with the vocal coach who would help us choose our song for the audition. I sang a song that was very new at the time – ‘Sign of the Times’ by Harry Styles. All songs were chosen based on if it’s been performed in other competitions or not.

When we arrived at the studio we also recorded some bits of interviews and random bits with my family and of all the kids together who were auditioning. The day before my audition we did rehearsals onstage to see how our songs were going, if the key was right etc. Our vocal coach would give us advice and lessons and he was by our side telling us how we should walk on-stage etc.

On the day of my audition I was very excited and nervous as I was the second-last person in my group to go up. It was only me and my friend left – so I was back-stage shaking…and he was like, ‘You’re going to be okay, you’re going to do great!’

ILQ: And did you?

JT: Yeah. The family room was near the stage, and my parents were there and while I was backstage we had a psychiatrist talk to us about how to breathe and if we’re nervous what to do.

They said ‘Janna it’s your turn to walk onstage’ and I was like ‘ME?!’ And so basically I walked onstage and my family were looking anxiously at me, but my Mom was very happy. They told us to look at the music prompter and give a sign when we’re ready to sing. When the song started playing and I began to sing, the lights came on and I saw the judge’s seats and I was like ‘Ahhhh!’

About half-way through the song I got seriously nervous and I was panicking that I’d forget my lyrics. I thought I’d embarrass myself. But I ended up singing it well and at the end I was like ‘Phew!’

ILQ: And what was the verdict after your performance?

JT: Unfortunately, nobody spun around for me…but it’s okay. When I was near the end of my song I thought, ‘Okay it’s not going to happen’, and I started getting emotional onstage,.I tried to keep it in as much as I could. The judges Tamer Hosny, Nancy Ajram, and Kadhim Al-Sahir talked to me and Nancy said she would have turned for me but her team was almost full and there were still a lot of auditions. So she was like, ‘If I had one more space to give you I would’ – but she couldn’t.

Tamer said he also would have turned for me, but he was waiting for the high notes but I was nervous so I couldn’t do it well. And Kadhim said that at his age he would never have had the courage to perform as I did. After I spoke to the judges I hugged them all and Tamer walked me offstage and I was back with my family in the private room where I just cried.

ILQ: How did you cope with the experience of trying and not making it through?

JT: My Mom asked ‘Are you disappointed in yourself?’ – but like not in a bad way. She was just asking me if I was okay. And I said ‘Yeah, I’m just sad though…’

Then, my friend that was with me and went onstage next, he came into the room and he was crying too and I was like ‘They didn’t turn for you?’ and then he was like ‘No!’. So I said, ‘Friends that don’t make it together, stay together!’

ILQ: What was the biggest thing you learned from it all?

One of my best friends from Qatar was texting me before my audition and she was like ‘The whole grade is telling you good luck [at my school] – they all know you and they’re so proud of you!’

Some people have even been messaging me saying that I’ve somehow inspired them to continue pursuing what they love and that I’m an idol to them. And that was so overwhelming.

ILQ: What is it about music and the act of singing that speaks to you as a form of expression?

JT: Basically, it shows a lot of emotion and, somehow, whenever I see someone singing or I hear a song, I can kind of tell what the person is trying to get out there and what type of person they are. When you sing, you can show a lot of passion and you can get a message through to the people who are listening – so that message is the main thing I focus on.

ILQ: You have the whole world in front of you Janna – where do you have your sights set next?

JT: I want to have a singing career and hopefully make something out of that when I finish school, but of course I’ll try to focus on my education as well.

There’s also a chance I might be participating in Britain’s Got Talent. I’ve applied and they’ve asked me to send them some of my videos to assess my skill. So I did, and they said that the competition’s in February and they’ll be getting back to me about when and where – so I’m just waiting to hear!

ILQ: We also heard through the grapevine that you were asked to sing on Qatari composer Dana Alfardan’s latest single? Tell us about that!

JT: So one of the honours at the 2017 Qatar National Music Competition was an award bestowed by Dana Alfardan to collaborate with her. It was based on merit for someone she thought deserved it and who she would like to have work on her new song with her and help sing it on her demo. And she chose me and she was like ‘I want her to sing with me!’

ILQ: What’s your message to the world Janna? To all those young people out there, like yourself, who dream of changing the world through the power of music?

Do you know of someone who’s got an exceptional talent or is making a difference in our Qatar community? Drop us a line in the comments below and you could see them highlighted in Qommunity Voices! Also, don’t forget to like and share this article!