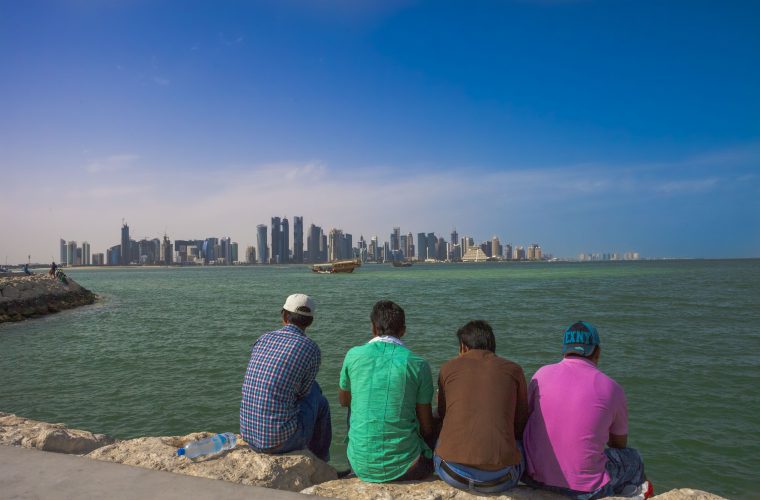 Nine years ago in Doha, Speed Ali had visited a construction site that had caught on fire. There were about 700 workers living on the site. Although there were no injuries or casualties, whatever possessions the workers had on the site were lost. There was one man in particular, kneeling in a half burned portable cabin shivering and shaking, who sparked Speed’s interest.

He asked the man in Urdu, chacha jee, which means uncle, "what are you looking for?" The man responded that he had saved around QR 6,000 for his daughter’s marriage and was supposed to fly back to India within the next two days, but the fire destroyed everything.

The man’s loss greatly impacted Speed and that’s when he first put out a call to action online to garner as much help as he could for the laborers. To Speed’s surprise, over 200 people responded to his post and hundreds of people came out to the site with new items to donate to the workers, beginning his journey as the founder of Qatar Volunteers.

Speed Ali -- an online alias -- moved to Qatar from Dubai around ten years ago. Originally from Pakistan, Speed has dedicated his time in Doha to helping the community in whatever way he can through the Qatar Volunteers (QV) group. QV has about 23,000 members on Facebook, and around 500-600 people who participate in large scale campaigns and initiatives.

Some of these initiatives include blood donations, the Summer Cool Campaign (awareness on hot conditions for the laborers), the Ramadan campaign, beach cleanups, and national and international disaster relief. During these campaigns volunteers donate goods such as water, juice, dates, clothes, and other necessities.

“I am proudly here sitting with you to tell you that we are the only group in Qatar who is the most active and doing most of the activities with the community,” Speed said. QV’s campaigns are conducted on an annual basis, unless there’s a particular issue that needs awareness or support. If there is, Speed and a couple of other volunteers brainstorm a plan and then execute it.

“We have done work for the Pakistan flood and the Pakistan earthquake. We have done things for Nepal and for Sri Lanka as well, but it's based on call,” Speed said. “Like when there is an earthquake in Pakistan, people come to us and ask ‘how can we donate?’ Then I go to charities like Qatar Charity and Qatar Red Crescent. They support us. They give us the space for collection and everything.” More than 200 people came to volunteer for the Pakistan Earthquake Project and thousands donated to the cause.

QV represents a melting pot of different people. “We have people from Pakistan, India, Nepal, Sri Lanka, Africa, Europe, USA, Canada. I just want to give an example, we have people volunteering with us from cleaners to CEOs,” said Speed. Many Qataris also volunteer, donate, and dedicate their time to QV.

According to Speed, leadership is necessary to lead people in the right direction. “If you are asking me as an individual, I don’t believe I can do anything alone. It’s teamwork. I believe my leadership is required in the community.” Speed has always dreamed about uniting people. QV is one of the ways he hopes to accomplish this. It’s about bringing people together for a special cause.

“See the main purpose that keeps QV going is to kill the gaps between the white collar and blue collar,” Speed said. “Give back something to the community. People don’t know how to go and help the communities. There are lots of way to help here but still the awareness is not spread in the way it should be done. So this is our aim to reach the maximum number of people to raise awareness on how they can help.”

Using mostly Facebook and word of mouth to reach out to people, Speed shared that everyone is welcome to join. QV doesn’t discriminate when it comes to campaigns for any particular causes or social issues. “The most important thing is that we work for humanity. We don't go for certain nationalities, we don’t go for certain races or certain religions.” Speed said. “If he is a human being, he deserves whatever the help is. So that is the success of our group.”

When asked how volunteers balance their time between personal life and volunteering, Speed said, “It's basically very simple. I tell everybody that if you really want to do something you can do it. Nothing is impossible. If you want to do any campaigns we plan something during weekends.”

In order to accommodate people’s schedules most activities, particularly collections, packing, and distribution, take place during the weekends on Thursdays, Fridays, and Saturdays.

Speed believes that it’s our responsibility as people, to give back to the community. “You should give back to your community; the needy people, the poor people, because at the end of the day we all have to die, we all have to go to God and we are answerable,” Speed said. “God has given me a luxury life and if I have never spent on needy or poor people then what's the use of my life?”

One of Speed’s most memorable stories working with QV is about 20 laborers from India.

“Their sponsor ran away and he left them abandoned basically in one of the villas. The owner of the villa cut the electricity and it was summer time,” Speed said. “They had nowhere to go and if you go inside the villa you'll see people sleeping only in their underwear - sorry to say - but it was so hot! No fan, no AC, nothing.”

Speed later met with the laborers, who hail from Gujarat in India, which is known for being a conflicted area for Muslims and Hindus. He asked them what happened and they told Speed that their sponsor ran away and that they weren’t allowed to leave the villa.

“I asked them ‘what do you want?’ They said they needed something to cool down, so I wrote a story on Qatar Living and the community people started coming to the villa,” Speed said. “Some people came with pedestal fans. The neighbors of the villa also read my story and then they provided them electricity with one of the wire extensions.”

People provided more fans, a number of Ooredoo Hala cards, and a nearby cafeteria started providing the laborers with free meals.

“See how people are generous, how things happen if I go and take up the story?” Speed said. “The [laborers] asked me ‘where are you from?’ I said I’m from Pakistan, they said ‘oh! you are from Pakistan? We thought you are from India.’ That was a changing moment for them. They said, ‘to be honest we used to hate Pakistan, we used to hate Muslims, but after you what you did with us we are going back to India to tell everybody that Pakistanis are good.’”

An act of kindness can change perceptions. If you’re looking to volunteer with an organization in Doha, be sure to check out the Qatar Volunteers page on Facebook: https://www.facebook.com/QatarVolunteers/