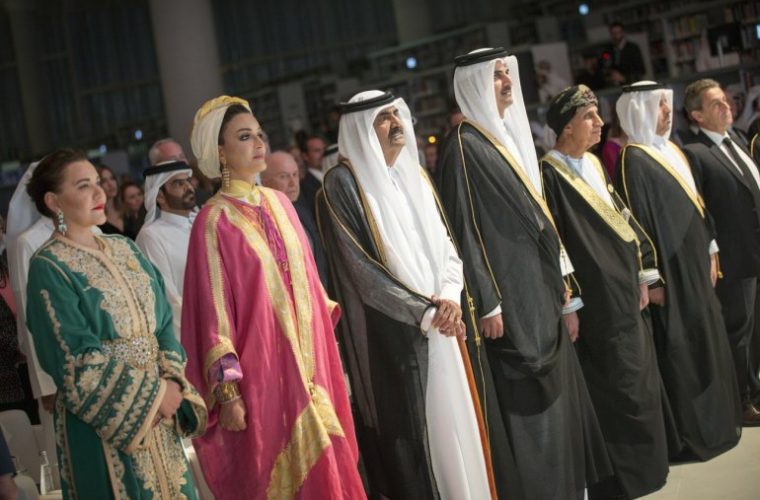 With the official inauguration QNL became the first new national library to open anywhere in the world in this millennium.

“The inauguration of Qatar National Library invokes a great sense of historical pride and belonging to the Arab world, which pioneered writing, transcription, and libraries in Mesopotamia 5,000 years ago. The idea of the National Library was inspired by this glorious history, in hopes of restoring an Arab renaissance that we do not want to lose.

“The library was established to be a treasury of written history and a medium for the transfer of knowledge between different cultures,” said Sheikha Moza addressing the guests.

“Essentially, it will be an institution of reference for Arabic and Islamic heritage and a platform for spreading contemporary intellectual and literary thought. QNL is designed in form and content to be three-dimensional: A national library, a public library, and a research library in one.”

“As an advanced digital library, it will allow users immediate access to accurate information. It will provide new generations with the necessary, intellectual tools to read and interpret history correctly,” said Sheikha Moza.

“The National Library would not have reached these distinguished heights as a monument of knowledge without the unwavering vision of the country’s leadership. From the reign of the father to the son, supporting sustainable and strategic development projects, particularly in human development,” she added.

The QNL has been five years in the planning, having been founded in 2012 by Sheikha Moza and she placed the first book on the shelves of the library in December, 2016.

Following the inauguration, poet Tamim Al Barghouti spoke on ‘It is still possible’, and light infused travel through past, present and future of Qatar was featured under the theme ‘A Nation Guided by Knowledge.’

While, renowned Dutch architect Rem Koolhaas who designed the QNL spoke on ‘The architecture of cultural institutions.’ Roly Keating, CEO of the British Library and Nicholas Negroponte, co-founder of the Massachusetts Institute of Technology Media Lab also addressed the guests.

“Qatar National Library seeks to be a centre of learning not only in Qatar but also internationally. This grand opening, which welcomed more than 700 visitors from Qatar and around the world, demonstrates the continued global importance of libraries in everyday life,” said Dr Wastawy, Executive Director, QNL.

QNL opened its doors to the public in November, 2017 for an experimental period and has welcomed more than 200,000 visitors during the five months. The library’s collection includes books in 20 languages including English and Arabic, and has a dedicated Children’s Library and Young Adults collection.

To mark the inauguration, QNL will host a series of public lectures, exhibitions and other events including the inaugural Heritage Library exhibition. (Source)