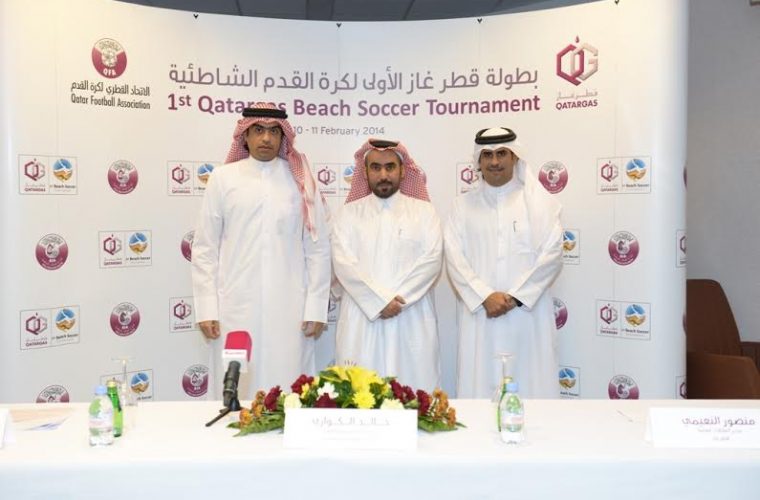 Qatar Football Association (QFA) and Qatargas announced at a press conference today that the 1st Qatargas Beach Soccer Tournament is set to be held on Monday 10th and Tuesday 11th February, 2014 from 14:00-20:00.

Organised by Qatargas and the Qatari football governing body QFA, the first edition of the Qatargas Beach Soccer Tournament is being held in Qatargas’ winter camp in the sealine area, and will witness the participation of 12 local teams.

Mansoor Rashid Al Naimi, Qatargas Public Relations Manager said: “Qatargas is very pleased to support this tournament as part of our ongoing collaboration with the QFA. This further strengthens our existing partnership with QFA as Qatargas is currently the title sponsor of the Qatargas League. We also sponsored the prize money for the top three teams at the 8th West Asian Football Federation Championship held recently in Doha. Qatargas looks forward to continuing its fruitful partnership with QFA and support the further development of football in Qatar.”

“As the world’s largest producer of Liquefied Natural Gas (LNG), our support to this tournament and hosting employees of QFA and their families at the Qatargas winter camp stems from our corporate social responsibility initiatives to support sports and related activities as well as our commitment towards social development in the local community. I extend sincere thanks to QFA for providing us the opportunity to participate effectively in the State of Qatar’s efforts to host and support global sporting events.” he added.

Commenting on the occasion, Khalid Mubarak Al Kuwari, Director of Marketing and Communications of QFA said: “There is no doubt that this new partnership with Qatargas is an important milestone in QFA’s2021 vision. This partnership constitutes the strong relationship we have with Qatargas which we are proud of. We intend to build on this relationship by implementing many joint initiatives in the future that would benefit the football sector in Qatar.”

He added: “In conjunction with the tournament, QFA is organising a family day for the staff and their families. It’s an opportunity for the staff to enjoy their time away from work atmosphere and strengthen their interpersonal relations.”

He added: “The champions of the tournament will receive cash prize money of QR30,000, while the runner up will be granted QR20,000, and third place will receive QR15,000. Top Scorer, Best Goalkeeper, Best Coach, Best Player, Most Promising Player and Best Manager will also receive QR 15, 000 each.

There are multiple advertising possibilities with the ILQ network, drop us an e-mail at [email protected].net for inquiries!