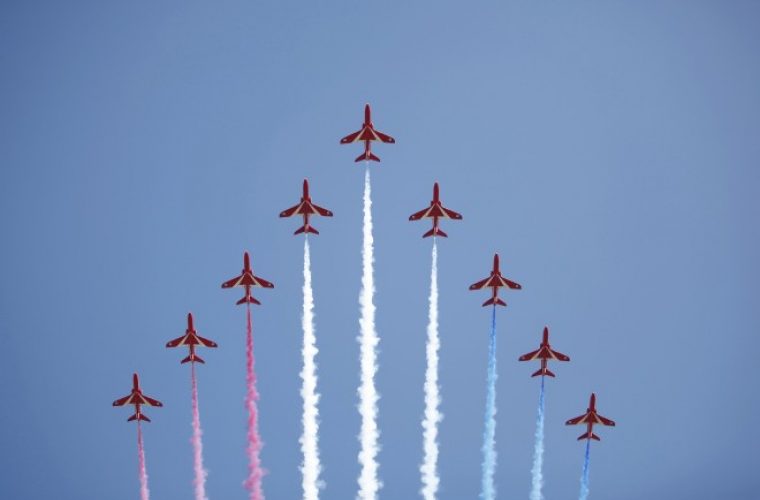 The Driven by German Design exhibition is a part of Qatar Germany Year of Culture 2017 and recently opened to the public last week. This exhibition is being held at QM Gallery Al Riwaq and features the development of German design over the past six decades. The exhibits include some of the most iconic cars to ever be designed, such as the Porsche 911 Turbo and Volkswagen Golf and Käfer. The exhibition had been organized into three main sections which are designed to educate, inform and entertain visitors. This is how Qatar reacted:

The Royal Air Force Aerobatic Team, the Red Arrows, put up a spectacular show in Doha’s skies as a part of their Gulf tour. This tour is aimed at strengthening the United Kingdom’s relationship with the GCC countries. This show also featured Qatar Airways Airbus A350 along with nine Red Arrows jets to help celebrate the 20th anniversary of Qatar Airways. The 20-minute show was planned by Qatar Airways and the Red Arrows in collaboration with the Qatar Civil Aviation Authority, the Ministry of Defence, the Emiri Guard, and Qatar Civil Defence representatives. Qatar’s residents were super excited for the show as they gathered to watch from the Corniche and West Bay. This is how they shared their experience on Twitter:

Even though the petrol and diesel prices were stable in the month of September, Qatar Petroleum decided to raise the fuel prices based on the fluctuations in the global market. Starting this month, the prices will go up by 10 Dirhams a litre for petrol and 5 Dirhams per litre for diesel as per the reports of Gulf Times. The Ministry of Energy and Industry said this decision made to “raise the efficiency of energy use in the country and raise consumers’ awareness.”

Qatar resident Nawaal Akram made it to the list of BBC Top 100 Inspirational Women of 2017. She is one of the three women from the Middle East on the list. Nawaal was diagnosed with Duchenne Muscular Dystrophy as a child but she defied all odds and became a comedian and model. She is an inspiration for everyone out there. It’s a proud moment for Qatar!

The deadliest mass shooting in modern American history took place this week. The perpetrator was a 64-year-old caucasian man named Stephen Paddock. He shot at concertgoers at the Route 91 Harvest Festival for around nine to eleven minutes straight. He fired from the 32nd floor of a hotel window leaving at least 58 people dead and more than 500 injured. This incident reflects on the lack of gun control policies in the US. The police are yet to find the motive behind this attack.

Did we miss your favorite news from the week? Let us know in the comment section. If you want to be featured in our Tweets of the Week, make sure to tag @ILQlive or hashtag #iloveqatar on Twitter! Don’t forget to like and share - it keeps us going!